So far, no major positive news came out of Ukraine/Russia, leading to another sell-off in risky assets.

The shared currency declined on Monday as sentiment remained negative due to the Ukraine-Russia military conflict.

The euro dropped to the 1.08 level before recovering, marking the lowest level since the global lockdown panic in March/April 2020.

Markets will remain dominated by the war headlines coming from Ukraine and Russia, putting intense selling pressure on stock markets. On the other hand, commodities are rallying hard, pushing the WTI oil to the 125 USD level. At the same time, gold tagged 2,000 USD, silver rose above 26 USD, and copper jumped above 5 USD for the first time ever.

Traders are also buying safe-haven currencies such as the USD and CHF. As a result, the dollar index advanced toward the psychological level of 100 today.

In his last week’s speeches, Fed Chair Jerome Powell told lawmakers that he would support a 25-basis-point rate hike at Fed policymakers’ next meeting later this month but cautioned that the central bank would continue to monitor developments in Ukraine and be prepared to raise rates faster if necessary.

Elsewhere, the US Labor Department reported nonfarm payrolls increased by 678,000 last month, the most significant jump since July and well above the 400,000 predicted by economists. The department also revised upward its totals for the previous two months.

The unemployment rate dropped to 3.8%, better than estimates, and the lowest since February 2020, right before the pandemic outbreak. Still, total nonfarm employment is down by 2.1 million jobs, or 1.4%, since then.

On the other hand, wage growth failed to meet expectations and slowed, both yearly and monthly.

Technically speaking, the euro will likely retest the post-lockdown lows in the 1.0630 – 1.07 area. Both the risk-off flows into the USD, and the aggressive Fed could further support the USD.

If that support is not defended, we could see a quick decline toward 1.05 or possibly toward parity later in the year.

Alternatively, the euro must return above 1.12 to stabilize medium-term. Until then, rallies could be sold, and the trend seems bearish. 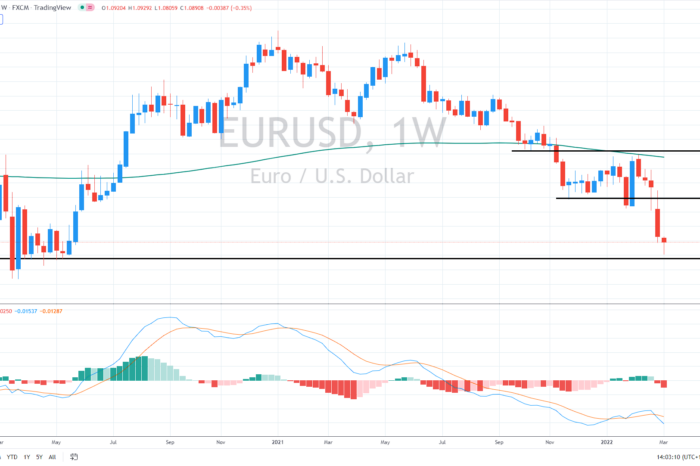