The EUR/AUD cross was higher on Thursday, trading near 1.4580 but remaining near the lowest level since July 2017.

During the Australian session, the domestic trade balance for February worsened notably to 7,457 million AUD, down from 11,786 million AUD in January. Exports declined from 6% to 0%, while imports rose to 12% from -2% previously.

Traders also took some profits after the big rally in the Australian dollar this week, following the recent monetary policy decision by the Australian central bank.

In Europe, German industrial production improved yearly to 3.2% in February, up from 1.1% in January. However, the month-on-month comparison fell from 1.4% to 0.2%.

Additionally, the euro zone’s retail sales were also on the agenda, printing 0.3% monthly (up from 0.2% previously), with the yearly change falling to 5% (from 8.4% in January). The euro failed to react to these numbers and remained slightly higher on the day.

You may also like: The Fed plans to reduce its balance sheet

Elsewhere, Reuters noted a ban on Russian coal that the European Union is set to approve on Thursday would take full effect from mid-August. Initially, the ban was proposed to take effect from mid-July.

The source said this comes after pressure from Germany to delay the proposed measure. Germany is the EU’s primary importer of Russian coal.

“A raft of additional sanctions on Russia had been trailed and also came to pass. However, the lack of an obvious resolution to the current conflict continues to weigh on general sentiment, even before the true costs to the global economy become more measurable over the coming months.” Richard Hunter, head of markets at Interactive Investor, said today.

The technical analysis points to a possible reversal as the price is trying to get above previous lows at 1.46. That could be a bullish signal, also known as the false breakdown to new lows.

Furthermore, there is a notable bullish divergence between the price and the MACD indicator as the indicator has failed to post new lows (the price did). That could also hint at a possible bottom reversal.

If the euro jumps above 1.46, we could see a quick rally toward 1.4890. Should the price rise beyond that level, the medium-term downtrend could be over. 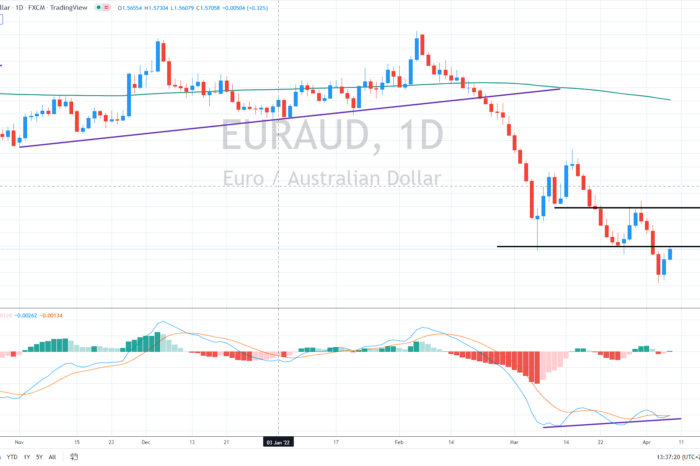