Volatility continues to be elevated, but it looks like AUD/JPY might continue higher in the near future.

The Australian dollar failed to hold earlier gains and declined against the yen as the AUD/JPY cross traded flattish ahead of the US session, hovering near 89.30.

Earlier in the day, Australia’s unemployment rate fell to 3.9%, matching the previous all-time low. Still, a drop in the employment change to 4,000, compared to the market estimate of 30,000 and 17.900 previously, appears to have undermined the Australian dollar.

Additionally, the part-time employment dropped sharply from 400 to -88,400, but on the other hand, the full-time jobs rose notably, printing 92,400 from 20,000 prior. The RBA’s 40-basis-point interest rate hikes appear debatable at the moment, given the weaker Employment Change.

“The Australian rate market is already fully discounting a 25bps hike in June, and there is little speculation over a larger 50bps hike. However, we don’t believe the favorable domestic developments are sufficient to outweigh building global growth concerns. As such, view risks as tilted to the downside for the Aussie in the near-term.” economists at MUFG Bank announced on Thursday.

You may also read: Russian division of Google to declare bankruptcy

At the same time, Japanese macro data came out mixed as well. Machinery orders for March improved to 7.6% year on year, up from 4.3% in February, with the monthly change also rising notably from -9.8% to 7.1%.

Even though safe-haven assets have cooled following a recent gain, the mood remains fragile due to growing fears that the Federal Reserve and other global central banks would hinder economic growth.

Fed Chair Jerome Powell had stated earlier in the week that the US central bank will raise interest rates as high as necessary to combat inflation, and dismal housing data released on Wednesday added to fears about a global slowdown.

The price has recently traded in a short-term declining channel, which could be interpreted as a flag pattern in the long-term uptrend. However, as long as the Aussie remains above previous highs of 86, the uptrend still seems intact.

Should the cross rise above 90, we might see another leg higher, targeting 94.00. 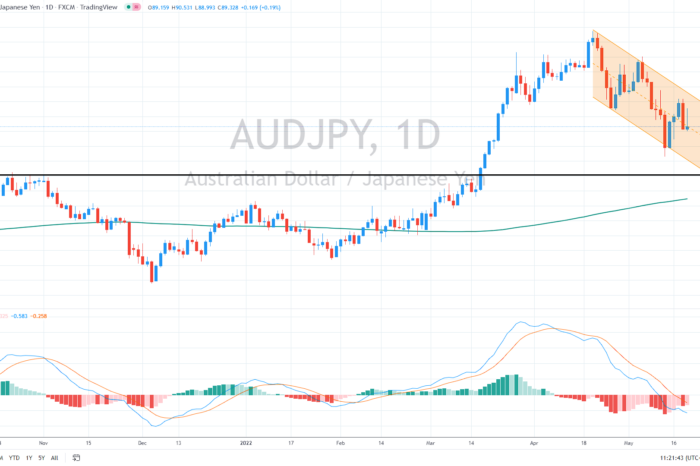