Bulls returned to the markets today as some positive news came from Russia.

Traders rushed into equities on Tuesday as geopolitical tensions between Russia and Ukraine showed signs of easing.

Firstly, investors paid attention to the latest UK jobs market data. The unemployment rate stayed at 4.1% in December, while claimant count change rose from -51,600 to -31,900. Additionally, wage growth rose more than expected. The ONS said that average weekly earnings, including bonuses, increased 4.3% in the three months to the end of December. Excluding bonuses, wages rose 3.7%.

Nominal incomes rose in a tight labor market as employment rose 0.1 percent to 75.5%. The number of payroll employees rose 108,000 in January to a record 29.5 million.

With consumer prices rising (CPI inflation) at 5.4%, real earnings dropped 0.1%. As a result, the Bank of England expects inflation to peak at more than 7%, resulting in the central bank’s monetary policy committee (MPC) raising interest rates at its February meeting for the second time in three months.

“The labor market appears to have shrugged off the end of the furlough scheme and the start of the Omicron wave, which will only encourage the MPC to continue raising interest rates. Dale said falling real earnings were “something we’re going to have to get used to. But the MPC will be more worried about how the tight labor market may add to inflationary pressures further ahead.” Paul Dales, chief UK economist at Capital Economics, said after the data.

Sentiment improved today, following reports by the news agency Interfax, quoting Russia’s Defense Ministry, who said that Russia will return some of its troops to their bases after completing a series of drills later this week. According to the Ministry’s website, joint exercises with Belarusian troops will continue until February 20th.

Risk assets, such as stocks, surged instantly, with US indices moving 1.5% higher. However, the Footsie index lagged a bit, gaining only 0.6% during the London session.

Later in the day, US PPI inflation figures are, seen easing slightly year-on-year but remaining near the 10% threshold at multi-decade highs.

Technically speaking, the index still trades above the long-term uptrend line. Thus, the bullish outlook remains intact. On the upside, the resistance is near 7,620 GBP, followed by last week’s highs near 7,700 GBP.

Alternatively, the support could be at 7,500 GBP, which has stopped this week’s sell-off. Therefore, the critical level to watch for bulls will be at the mentioned trend line, currently near 7,470 GBP. 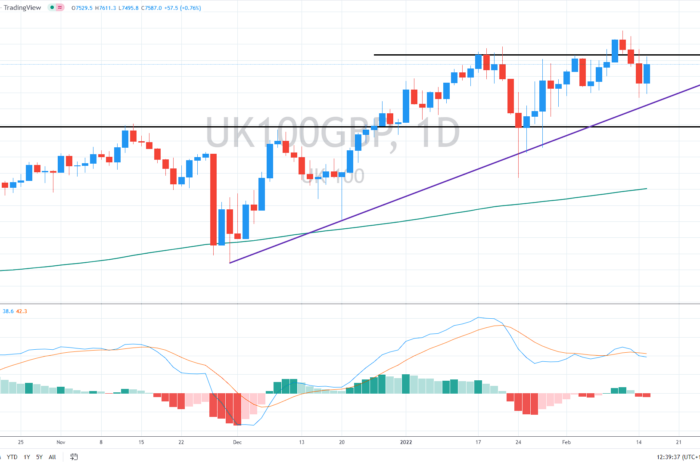