Weak macro data and high inflation numbers from EU prompted another day of selling in the EUR/USD pair.

The single currency has been offered today as sentiment deteriorated, boosting demand for the US dollar. As of writing, the EUR/USD pair traded 0.6% weaker, touching the 0.99 level heading into the US session.

In the three months leading up to September 2022, the Eurozone’s economy grew by 0.2% on a quarterly basis, beating the 0.2% forecast and 0.8% prior, according to a preliminary report released on Monday.

Annualized GDP growth for the bloc was 2.1% in Q3 compared to 4.1% booked in the second quarter of 2021 and was in line with predictions of 2.1% expansion.

Moreover, per the most recent statistics released by Eurostat on Monday, the annualized Harmonized Index of Consumer Prices for the Eurozone (HICP) increased by 10.7% in October compared to a 9.9% increase in September. The market expected a print of 9.8%.

Compared to predictions of 4.9% and the 4.8% reported in September, the core inflation increased to 5.0% yearly in October.

The Euro area data was released one trading day after Germany’s annual inflation rate for October, which soared 11.6% and beyond forecasts after a 10.9% jump in September.

Finally, as per official data by Destatis on Monday, Germany’s retail sales increased by 0.9% MoM in September, up from a prior decline of 1.3% and a forecast of -0.3%.

In September, German retail sales fell by 0.9% annually, less than the -0.4% forecast and the 4.3% decline seen in August.

Market investors will pay special attention to the PMI from ISM Chicago and the Texas Manufacturing Survey from the Federal Reserve Bank of Dallas later in the day.

“With global growth under pressure from tighter rates and a misfiring Chinese economy, we think the eurozone and the euro will continue to struggle. That is why last Thursday’s high of 1.0089 in EUR/USD could have been significant,” Economists at ING expect the world’s most popular currency pair to retest 0.95 on a break under 0.9910/00 this week.

Despite the recent breakout from the massive long-term bearish channel, upside momentum seems to be lacking, likely indicating a possible retest of the 0.98 level, where the short-term uptrend line is converged with the broken, bearish channel.

You may also read: Weekly macro report – Do not expect dovish result from FOMC

That is the crucial support for the EUR/USD pair for the next few days, and if not held, we might see a quick decline toward 0.96. 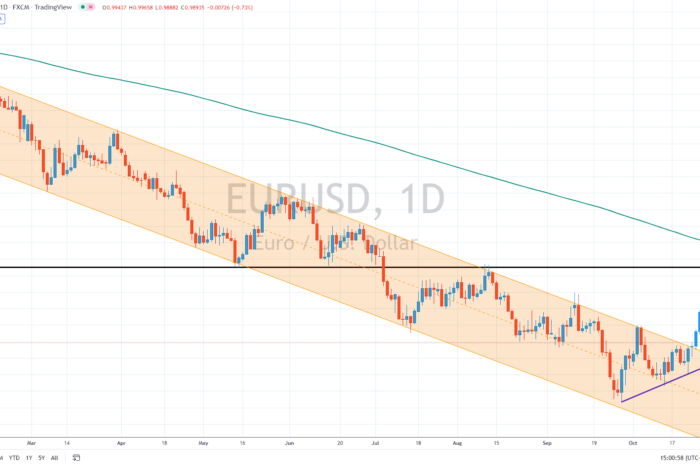