This week will be dominated by the Federal Reserve's meeting in Jackson Hole on Friday while EUR/USD got below parity again.

At the start of the week, sellers are still entirely in control of the mood around the euro, dragging EUR/USD to levels below parity again.

Interest rates in the United States have increased by 225 basis points since March. Still, everyone will be watching Chairman Jay Powell’s speech in Jackson Hole, Wyoming, on Friday for any indications of how high they may rise and how long they will need to stay there in order to bring inflation under control.

Markets have not yet decided on the amount of the September Fed rate hike, but according to Reuters, only 18 of the 94 economists polled recently predicted the US central bank to choose a 75 basis point (bps) rate change. But according to the CME Group FedWatch Tool, markets are already pricing in a 75 bps rate hike next month with a 48.5% likelihood.

“The Fed and other central banks want tighter financial conditions to be sustained in order to reinforce downward pressure on inflation, and the concerted effort through rhetoric by the Fed is helping in achieving that.” Economists at MUFG Bank said on Monday.

You may also like: Germany’s dependence on China has increased

Elsewhere. the market anticipates a rate increase of 54 basis points in Europe at the ECB meeting on September 8th. If the ECB wants to provide some support for the EUR/USD, it should start talking about the possibility of more aggressive rate increases. So far, that has not been happening.

As the region’s inflation outlook hasn’t changed, ECB board member Isabel Schnabel stated in an interview late last week that she supports another significant interest rate rise next month.

“It also seems that the European Central Bank does have a problem with the weaker euro – judging by Isabel Schnabel’s interview,” said analysts at ING in a note. “But to drive EUR/USD higher – the most relevant euro pair in an energy crisis – the ECB is going to have to turn a lot more hawkish. That is a tough job with a recession around the corner.”

Technically speaking, the EUR/USD pair remains in a significant downward channel, and the pair is currently testing the psychological level of 1.0000. If that level is broken down, further decline toward July’s lows of 0.95 is expected. Many analysts see a more significant drop toward 0.95.

Alternatively, the euro must climb above 1.02 to cancel the current bearish pressure. 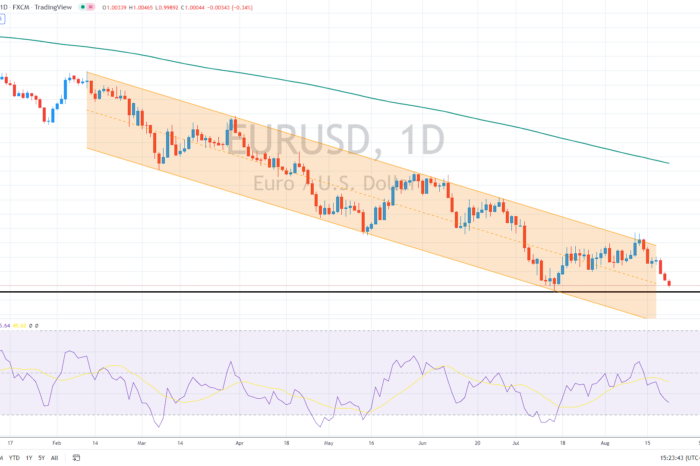