This week's macroeconomic highlight is due soon, with volatility expected to be elevated shortly after the data.

The EUR/USD pair traded slightly lower on Friday, waiting for this week’s headling macro event and trading at around 1.0730.

According to Eurostat’s official numbers issued on Friday, retail sales in the Eurozone fell by 1.3% month on month in April, compared to 0.3% projected and 0.3% the previous month.

The bloc’s Retail Sales increased by 3.9% on an annualized basis in April, compared to 1.6% in March and 5.4% expected.

Additionally, the EU services PMI fell slightly from 56.3 to 56.1, while the composite PMI also ticked lower a notch, printing 54.8. The euro weakened marginally following the data.

US jobs market on schedule

The Bureau of Labor Statistics will release its nonfarm payroll figures for May later today. 310,000 jobs are expected to be added in May, compared to 428,000 in March and April, according to forecasts. In addition, the unemployment rate is likely to remain at 3.6%, with salary growth slowing somewhat.

Over the previous year, the US economy added at least 400,000 jobs each month, bringing employment to only 1.2 million jobs below levels observed before the virus hit in March 2020.

Investors are on edge, with some fearing that the rate of monetary tightening in the United States may send the world’s largest economy into recession. According to Bloomberg Economics, the May labor data will likely show the weakest job increase since April 2021, as well as a downward tilt in average hourly wages growth.

“A significantly stronger number would hardly be a USD-positive argument. But honestly: I don’t trust the currency market to think that much around the corner. After all, it did not manage to do so on Wednesday after the ISM data.” economists at Commerzbank said ahead of the release.

Finally, the ISM services survey will be revealed, expected to fall slightly from 57.1 to 56.0 in June.

So far, the euro has managed to capitalize on the USD weakness, rising again to the upper line of the downtrend line, currently near 1.0740. If bulls push the pair further higher, the next target could be at 1.08. Today’s data might help in maintaining the upward momentum.

Should the euro jump above 1.08, the medium-term outlook could change to bullish, likely leading the single currency toward 1.12, where the 200-day average is converged with previous highs and lows.

Alternatively, the intraday support is expected to be at this week’s lows at 1.0640. If not held, further decline toward 1.05 seems likely. 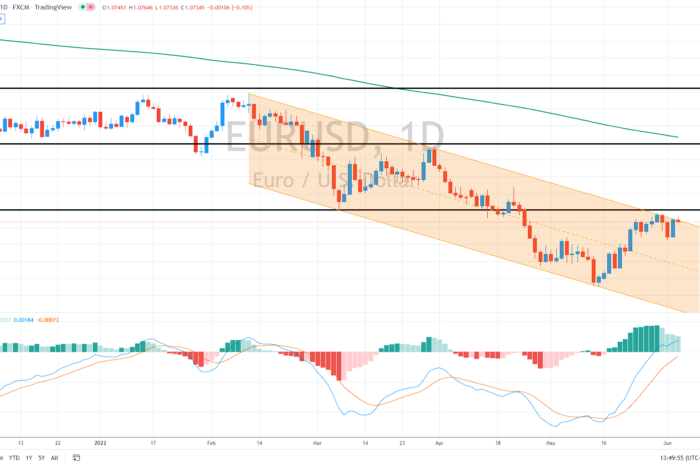