It looks like another bearish day for the single currency as the USD remains unstoppable.

The euro continued in its slide against the greenback, falling to levels last seen more than two decades ago as the EU economy is quickly imploding.

Germany’s consumer confidence is predicted to reach its lowest point in October, falling from -36.8 in September to a new all-time low of 42.5. The figure was less than the -39 market consensus.

Meanwhile, according to Reuters, President of the European Central Bank Christine Lagarde maintained on Wednesday that rates will continue to rise throughout the course of the upcoming sessions.

“I gave a little forward guidance by saying that after 125 bp hikes that there will be more hikes in the next several meetings,” she said.

Influential investment firm Goldman Sachs anticipates the ECB to increase interest rates by 75 basis points at its meetings in October and December, on top of the 125 basis point increase at its previous two sessions.

In other news, Russian monopoly Gazprom said the operator of the Ukrainian gas pipeline Naftogaz Ukrainy may be added to Russia’s list of sanctioned enterprises, according to a statement made by Gazprom late on Tuesday. If this were to happen, practically all of Gazprom’s remaining shipments to the EU would be cut off.

The Nord Stream pipelines, which transport natural gas from Russia to Europe over the Baltic Sea, were destroyed in an apparent act of sabotage earlier on Tuesday, escalating the tension between Russia and Europe over energy.

Technically speaking, the EUR/USD pair trades within a massive bearish channel, reaching it’s lower bound. That could be a good opportunity for a small relief rally, targeting 0.98, or possibly parity, while still staying within the channel.

However, should the pair decline below 0.9560, we might see more selling toward 0.95, or possibly lower.

“EUR/USD has benefited from ECB rate hike aggression, but this failed to stop it falling in Q3. Deeper problems such as energy shortages, the risk of a new phase of the Russia/Ukraine conflict, and even the possibility of an Italian debt debacle lurk as valid threats in Q4.” Economists at Credit Suisse now target 0.9000 for the fourth quarter. 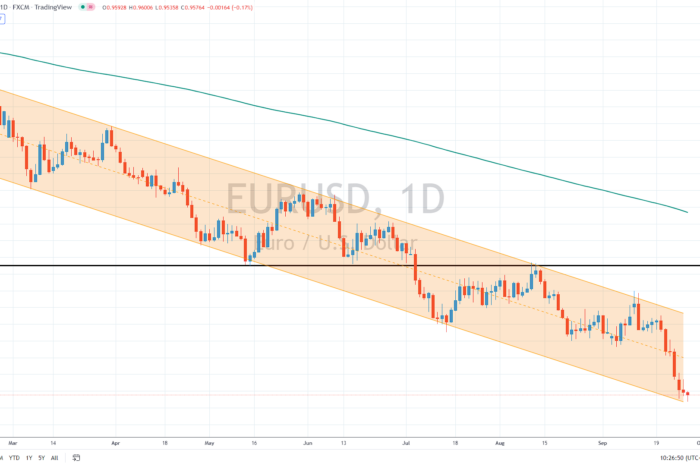