The single currency was offered on Friday, losing circa half a percent ahead of the US session, pushing the EUR/USD pair below 1.0450.

The Harmonized Index of Consumer Prices (HICP), which measures annual inflation in the euro area, increased to 8.6% in June from 8.1% in May, according to a report released by Eurostat on Friday. This reading exceeded the market’s prediction of 8.3%.

The Core HICP, which excludes the volatile food and energy costs, decreased from 3.8% to 3.7% during the same period. Nevertheless, according to Reuters, only a 20% chance of a 50 basis point ECB rate rise in July is being priced in by the money markets.

Additionally, the S&P Global Manufacturing PMI fell to 52.1 (final) from 54.6 in May, reflecting the slowest economic activity expansion in the eurozone’s manufacturing sector in 22 months. This result was a little bit better than the 52-point flash estimate and the market anticipation.

“eurozone manufacturing has moved into decline in June, with production dropping for the first time for two years amid a steepening downturn in demand,” said Chris Williamson, Chief Business Economist at S&P Global Market Intelligence.

You may also read: GBP/USD remains resilient in risk-aversion trading

“Orders for goods have fallen at an accelerating rate over the past two months, dropping in June in every country surveyed with the exception of the Netherlands, and even here, the rate of growth has weakened markedly in recent months.”

The ISM manufacturing PMI for June will be released as the major piece of US data on Friday. This indicator is predicted to decline from 56.1 the previous month to 54.9 on Friday, reflecting a decline in mood.

On Thursday, the Chicago PMI declined to 56.4 in June, down from 60.3 in May, getting closer to the 50.0 threshold, which is the line between contraction and expansion. In addition, a slower growth rate or outright contraction has been indicated by other manufacturing figures that have been released earlier.

The euro remains in a downtrend, as evident from the daily chart. The following support is expected near 1.04, and when broken down, we might see another leg lower, targeting the current cycle lows near 1.035.

Alternatively, the single currency must climb above 1.06 to cancel the immediate bearish threat. 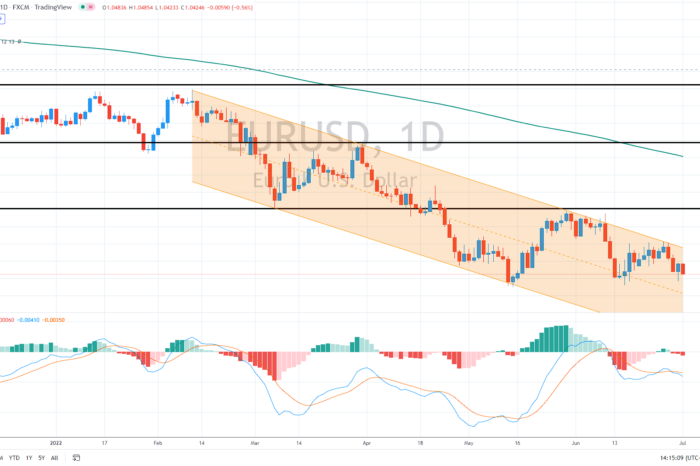