This week's trend will likely be decided on Wednesday amid crucial US data.

The single currency has so far managed to defend its medium-term uptrend, changing hands above the 1.08 level, last seen in April 2022.

The disclosure of the projected decrease in the United States Consumer Price Index (CPI) for December has increased the likelihood that the Fed will further reduce its policy’s tightening pace. In December, after noticing a significant fall in the inflation rate, the Fed changed from a 75 basis point (bps) rate rise scale to a 50 basis point (bps) scale.

Given that the annual inflation rate has declined to 6.5% due to a steep decrease in fuel and used vehicle prices, Fed officials are considering a 25 basis point (bps) rate increase. This will support the central bank in continuing its fight against inflation and providing a buffer against a slowdown in economic activity.

Focus on US data this week

Wednesday will see the publication of the United States Producer Price Index (PPI) data, which investors will closely monitor. According to the consensus, a 6.8% increase in headline factory gate prices of goods and services (Dec) from the previous report of 7.4% is anticipated. In addition, the core Producer Price Index may slip to 5.9% from 6.2% in the same time frame.

Furthermore, the US Census Bureau will publish on December retail sales, delivering an essential update on Christmas consumer spending. Retail sales are anticipated to fall 0.5% in December, extending their falls following a 0.6% dip in November. Sales are expected to have underperformed last month due to a combination of high inflation, increasing interest rates, and the depletion of household savings from the beginning of the epidemic, despite online sales hitting records early in the Christmas shopping season.

For the moment, the Euro benefits from the overall USD decline. Nonetheless, Commerzbank economists anticipate poorer Eurozone figures, leading to continued depreciation in the single currency.

“We expect negative Eurozone growth as early as Q1. In the near future, the data is likely to be much less positive than is currently the case. That is why I hesitate to consider the current EUR strength totally sustainable,” they said.

The uptrend channel is still intact, with the euro slowly rising within it. Thus, the supports for this week are at the lower bound of the channel near 1.0730, followed by the 21-day moving average at around 1.0670. As long as the euro trades above those levels, the immediate outlook still seems bullish.

However, there is a significant bearish divergence between the RSI indicator (which has not confirmed higher highs in the price) and EUR/USD, implying a possible correction lower soon. 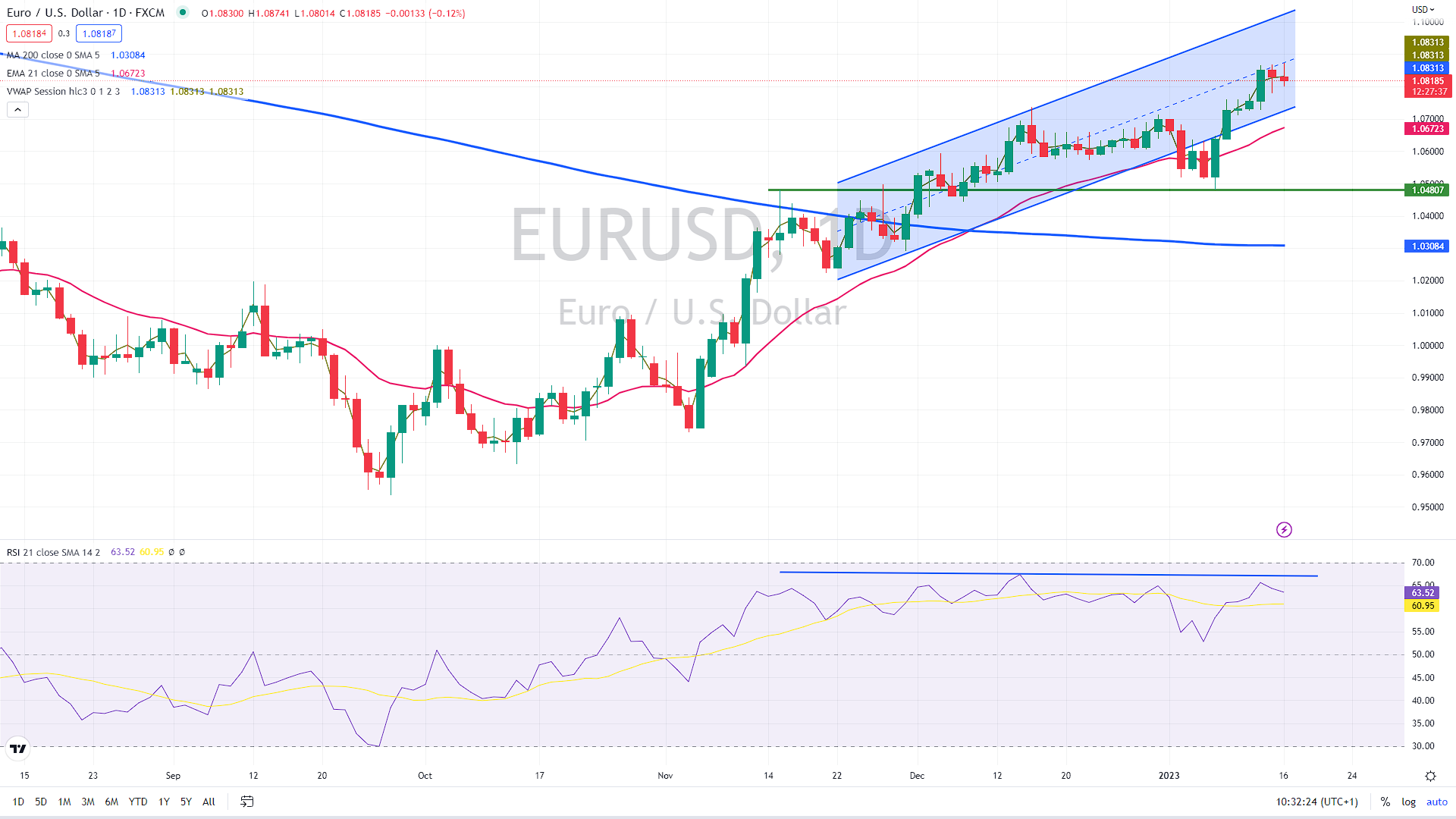