So far, the 0.87 support has held, offering some nice momentum for the bulls.

The euro-sterling cross moved higher on Thursday, using the broad GBP weakness to defend the critical support near 0.87. As of writing, the euro traded half a percent stronger against the Pound, changing hands near 0.8770.

According to the most recent statistics released by the Federal Statistics Office on Thursday, contracts for items labeled “Made in Germany” decreased by 2.4% for the month versus -0.7% projected and -1.1% previous.

Moreover, as per official data issued by Eurostat on Thursday, retail sales in the Eurozone decreased by 0.3% MoM in August, compared to a -0.4% projected fall and a -0.4% decline in July.

Troubles in the UK continue

In the UK, Chief financial officers’ forecasts for consumer price inflation in the UK continued to grow in September, according to a poll conducted by the Bank of England (BOE) on Thursday.

“British businesses’ expectations for consumer price inflation in one year’s time rose to 9.5% last month, up from 8.4% in August. Businesses expected output prices to rise by 6.6% in the year ahead, up from expectations of 6.5% in August.” the survey said.

The Bank of England (BOE) also stated in a letter to the Treasury Committee that “liquidity levels were fragile in the run-up to the BOE gilt intervention.”

“Had BOE not intervened, a large number of pooled LDI funds would have been left with negative net asset value and would have faced shortfalls in the collateral posted to banking counterparties,” the central bank added.

It looks like previous highs at around 0.87 could be the major support for the near future, offering enough buy pressure and liquidity to send the euro higher.

“In EUR/GBP, 0.8700 may emerge as an increasingly solid floor over the coming weeks,” economists at ING think.

In that scenario, the next target could be at 0.8860, while the medium-term profit threshold for bulls might be near 0.90.

You can also read: Poland surprisingly does not raise its interest rates

Alternatively, in case of a bearish breakdown below 0.87, we could see a quick drop toward the 0.85 mark, where the 200-day moving average would be located. 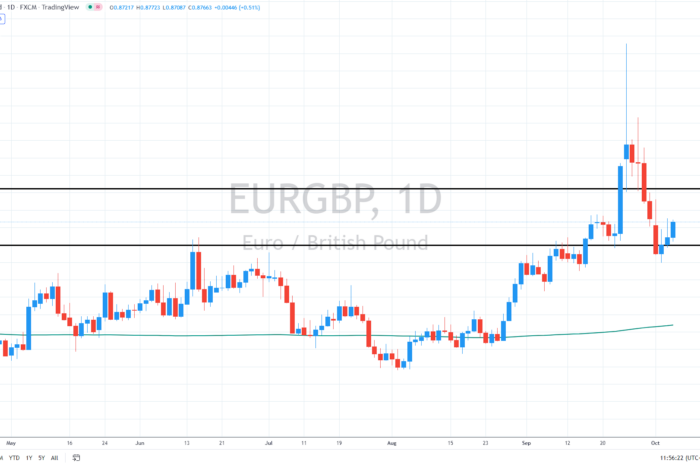