The euro-sterling cross was up for the third consecutive day on Friday, trading 0.20% higher during the London session and trying to recover from the recent sell-off.

In the UK, retail sales slowed notably in February, falling from 1.9% to -0.3% month-on-month, while the yearly change decelerated to 7% from 9.4% previously.

Elsewhere, German IFO showed a negative picture in the EU’s largest economy. The business climate dropped to 90.8 from 98.5 previously (likely due to high inflation and war in Ukraine), while the expectations index fell from 98.4 to 85.1.

In the view of analysts at Rabobank, the EUR/GBP cross is likely to trend higher into the middle of the year and beyond. Even on the bleakest scenario growth, the eurozone would still achieve 2.3% this year.

“Stagflationary risks could come from a worsening in the energy crisis in Europe. However, this week ECB President Lagarde offered reassurances that this was not on the cards and that even on the bleakest scenario growth, the Eurozone would still achieve 2.3% this year. As long as the market holds on to this outlook, we expect EUR/GBP to push higher towards 0.85 on a three to six-month view.” they said.

You may also like: Statistical, technical & behavioral analysis of Silver

On the other hand, economists at ING still expect the EUR/GBP pair to slide below the 0.83 level. “Despite a small rebound, we still see a move in EUR/GBP below 0.83 as likely in the near term given policy divergence and the euro’s greater exposure to fresh Russia-related downside risks.”

The euro dropped to new cycle lows in March, killing all the stop losses below the support of 0.83. However, the market quickly recovered and rose back above that level, posting a bullish reversal pattern. As long as it remains above 0.83, the medium-term outlook seems bullish, targeting the 0.8450 level, where previous highs will be converged with the 200-day moving average.

Alternatively, if the price drops below 0.83, we might see a quick decline toward the March lows at 0.82 and a possible start of a medium-term downtrend. 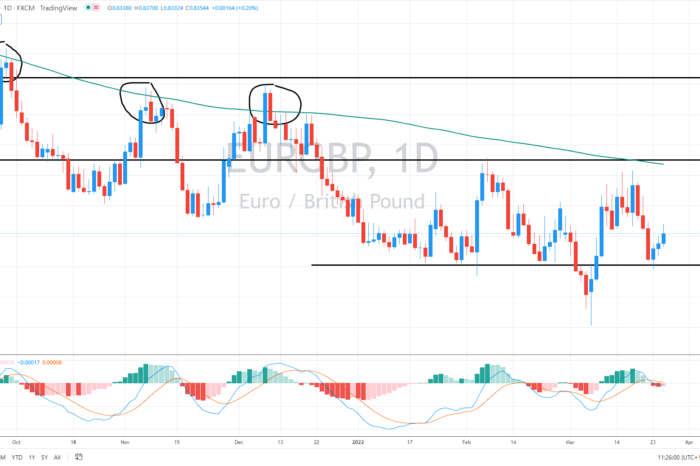