The EU STOXX 50 equity index surged nearly 2% on Friday, canceling the immediate bearish trend as investors are exiting their short positions amid a failure to create new swing lows.

However, data released on Friday indicated that French industrial production fell 1.6% on a monthly basis in July, a larger decline than the previously reported 1.2% decline.

According to Reuters, European Central Bank (ECB) policymaker Francois Villeroy de Galhau stated on Friday, “For our next policy move, we have our hands fully free.”

He further said that the ECB decided to frontload on monetary policy normalization because inflation is too high, especially core inflation. Additionally, he thinks that the neutral rate can be estimated in the euro area at below or close to 2% right now.

Moreover, Madis Muller, a member of the Governing Council of the European Central Bank (ECB), stated on Friday that “rapid inflation requires a firm reaction.”

Muller seems to be defending the 75 basis point rate increase that the ECB announced on Thursday.

The uncertainty around the inflation forecast is too great, according to Knot, and it is making it difficult for them to provide forward guidance. “Curbing the dynamic in inflation is the ECB’s main priority,” Knot stressed.

You may also read: ECB „tries“ to fight the inflation

In other news, according to Reuters, the European Central Bank (ECB) has written to banks instructing them to consider the implications of gas stops as the possible wave of defaults brought on by the oil crisis worries the ECB.

The EU Stoxx 50 index, similarly to the German DAX index, has defended the critical support near 3,400 EUR. The medium-term outlook appears bullish as long as the index trades above it.

The resistance for bulls could be at 3,700 EUR, followed by the recent swing highs and the 200-da moving average near 3,800 EUR. 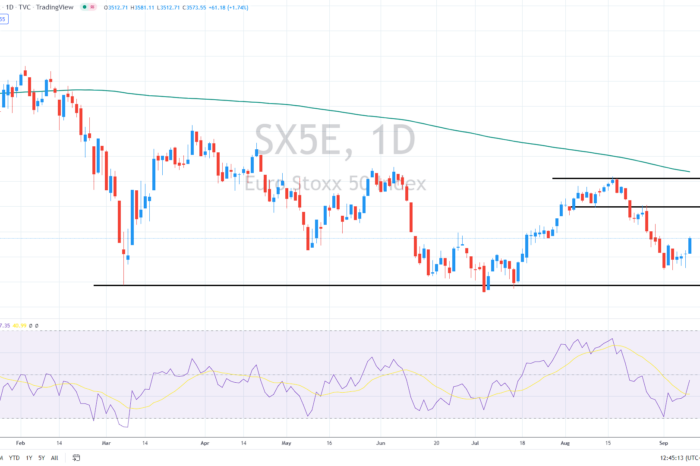