The Dow Jones index traded half a percent weaker today, erasing most of the losses suffered after today’s US jobs report and trading close to the eight-month highs reached earlier this week.

As a reminder, since the index is up more than 20% off its October lows, it has entered a bull market, according to the well-known definition.

The labor market is a silver lining for the US economy

Earlier today, data showed that nonfarm payrolls increased by 263,000, compared to the predicted increase of 200,000, as US firms recruited more employees than expected in November and increased wages amid rising recession fears. As anticipated, the US unemployment rate remained steady at 3.7%.

You may also read: Salesforce dumps after CEO Taylor exits the company

“Strong job creation and a big increase in wages underscore the Fed’s argument that a lot more work needs to be done to get inflation under control,” said James Knightley, chief international economist at ING.

Optimistic news regarding the Ukraine war

President Joe Biden has just made his most significant offer to Moscow since the start of the crisis more than nine months ago, stating that he is “willing to speak with” Vladimir Putin if Russia is ready to end the conflict.

“I am ready to speak with Mr. Putin if he decides he wants to find a solution to stop the war,” Biden said late Thursday afternoon, adding that he would need to check with NATO members first.

“He has not yet done so. If that’s the case, in cooperation with my French and NATO allies, I’ll gladly meet down with Putin to discuss his plans, “Biden said.

During a joint news conference with Macron, Biden said, “There is only one sensible way to end this war: Putin could withdraw from Ukraine. It looks like he will not do that.”

Nonetheless, as FT notes, “the remarks, given at a press conference in Washington, D.C., during a bilateral discussion with French president Emmanuel Macron, were Biden’s strongest expression of willingness to address the conflict with Putin.”

We all should hope that the rivals will meet behind the negotiating table. The sooner the better.

December is usually a strong month for US stocks, with the usual Santa Claus rally expected this year as well. The support line is seen near $34,000, and the index must defend it for the short-term uptrend to remain intact. The next target for bulls should be $35,000. 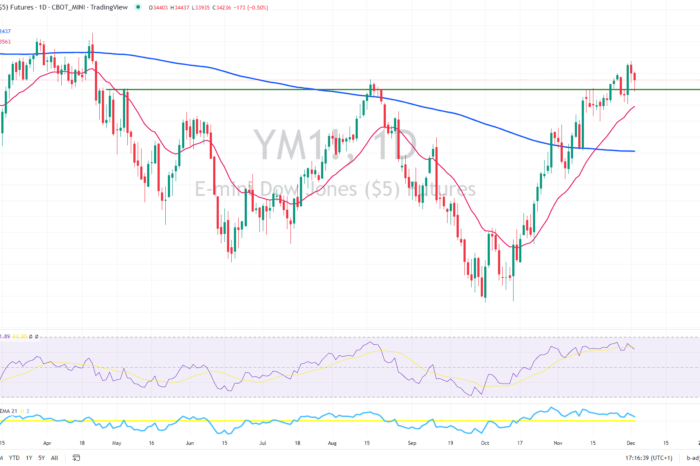