It looks like today's session will also be bullish as the oversold conditions in the markets could produce a more significant relief rally.

Sentiment remained positive in the markets as investors digested yesterday’s FOMC minutes, which failed to bring any hawkish surprises, leading to a rally in risk assets.

When writing, the Dow Jones index was up half a percentage point, trading at two-week highs near 31,250 USD.

The president of the International Monetary Fund (IMF) stated on Wednesday that the prognosis for the world economy had “darkened markedly” since April and that, given the increased risks, she could not rule out the possibility of a worldwide recession in 2019.

For the third time this year, the IMF will reduce its 2022 prediction to 3.6% global economic growth, according to Managing Director Kristalina Georgieva, who added that IMF analysts were still reviewing the revised statistics.

Moreover, ISM Services PMI for the US fell to 55.3 in June from 55.9 in May. However, the actual number was higher than the 54.5 market forecast. Finally, it’s important to note that the US JOLTS Job Openings for May fell to 11.25 million from the previously reported 11.68 million and the predicted 11.0 million.

Fed was not hawkish enough

Traders also focused on Wednesday’s Federal Reserve’s meeting minutes from the June 14–15 decision, which confirmed the commitment of the American central bank to act as necessary to control inflation.

“Participants concurred that the economic outlook warranted moving to a restrictive stance of policy, and they recognized the possibility that an even more restrictive stance could be appropriate if elevated inflation pressures were to persist,” meeting minutes stated.

However, there are still concerns that raising interest rates further to combat inflation could send the economy into a recession, particularly in light of recent softening signs in several important economic indicators, including consumer spending and sentiment as well as recent purchasing managers’ indices.

The Atlanta Federal Reserve’s GDPNow model currently predicts real GDP growth in the second quarter of 2022 at -2.1 percent, which, when combined with the 1.6 percent fall in Q1, would reach the unofficial recession threshold. On July 28, the official reading of the second quarter’s GDP is due.

Suppose the index jumps decisively above 31,250 USD. In that case, the current double bottom formation could send the index further higher, with the full potential of the pattern circa 850 USD, thus, targeting the 32,000 USD level.

On the other hand, if today’s session fails to bring a bullish breakout, we might see a decline below 31,000 USD again. 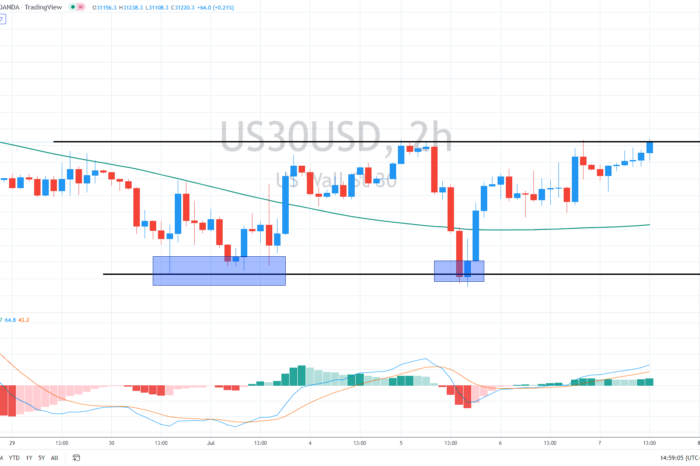