Despite the recent disappointment in tech earnings, we might see another risk-on session on Wednesday.

The Dow Jones equity index was up three days in a row, trying to print the fourth one as it traded flattish during the London session, having erased losses from the Asian session.

As of writing, it was seen near 31,800 USD, the level last seen during the massive slump on September 13th.

Later today, the US economic docket will include statistics on the September Goods Trade Balance and New Home Sales.

The owner of Google, the world’s most prominent digital advertising platform by market share, announced dismal ad sales as advertisers pulled back on their spending in the face of a slowing economy, which caused Alphabet stock to drop nearly 6% after hours.

Read more: What does Rishi Sunak’s victory mean for crypto?

After-hours trading in Microsoft stock also saw a decline of over 6% as a result of the software juggernaut’s disappointing prediction for revenue growth in its highly followed Azure cloud computing unit.

Moreover, according to US data released on Tuesday, the decrease in home prices accelerated in August. S&P CoreLogic Case-Shiller Index data released Tuesday showed that a nationwide gauge of house prices in August increased 13% over the same month a year earlier.

This is a month-over-month loss of 2.6%, the worst monthly dip in the index’s history, and is lower than July’s yearly increase of 15.6%. The prior record occurred in July.

Moreover, the Conference Board’s Consumer Confidence Index also dropped from 107.8 in September to 102.5 in October, falling short of the market’s forecast of 105.9.

As a result, the likelihood of a 50 basis point rate increase (bps) in December following a 75 bps increase in November has increased from 22% last week to 50%, according to the CME Group FedWatch Tool.

The next target in this rally could be in the 32,500 USD zone, where previous highs and lows converge with the 200-day moving average. Should the index jump above that level, it might be a solid bullish signal, indicating that the current bear market might be over.

You may also read: The world is hit by the first truly global energy crisis

On the other hand, the significant swing support appears to be in the 31,200 USD area, and as long as the index trades above it, the short-term trend seems bullish. 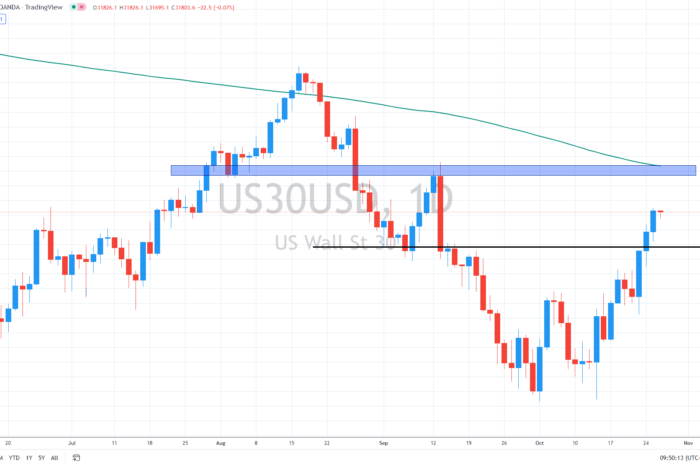