Monday has started in a slow regime as the DAX index showed no desire to move anywhere, trading unchanged ahead of the US session.

The German DAX has been flattish so far on Monday, trading near 14,500 EUR and trying to jump above the important 50-day moving average.

Earlier in the day, the German trade balance for February improved from 8.8 billion EUR to 11.5 billion EUR, with exports rising 6.4% monthly while imports rose to 4.5%.

The sentiment among investors dropped sharply to -18 in April from -7 in March vs. -9.2 expected. The index hit its lowest level since July 2020, hinting at an incoming recession in the second quarter.

“While the dip in March’s morale had been expected due to the start of the war in Ukraine, the strong fall in sentiment in April once again puts investors on the back foot.”

Elsewhere, the conflict between Russia and Ukraine continues to be split between hope and despair. Reports of some progress in talks aimed at ending the war continue to be offset by further reports of Russian atrocities which have seemingly strengthened the resolve of other nations to ratchet up sanctions once more.

Technically speaking, the DAX must rise again above the 50-day moving average (the green line), which is currently near 14,620 EUR. If bulls are successful, we might see another attempt to conquer the psychological 15,000 EUR zone.

However, if sentiment worsens, the index could decline toward the lower range of the consolidation pattern, currently near 14,200 EUR.

Moreover, the daily chart is looking rather overbought as the index has rallied nearly 20% without any meaningful correction. Thus, investors might take some profits from the mentioned rally, likely bringing the price to the support near 14,200 EUR. 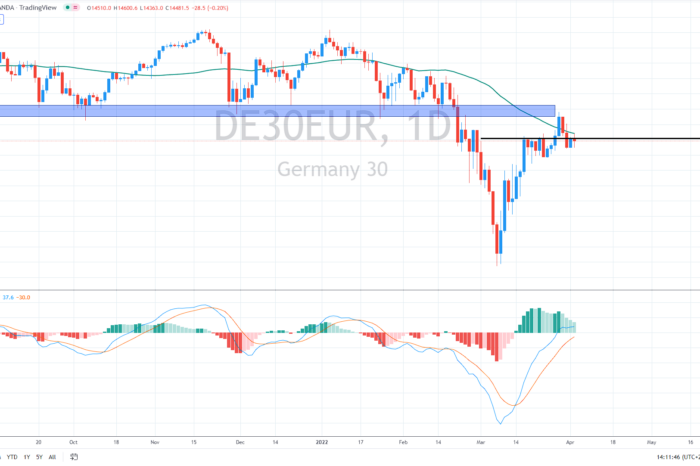