Another month, another record in EU inflation, not helping the sentiment in the markets.

As sentiment worsened on Tuesday, equity indices declined circa 1% ahead of the US session, with the German DAX falling to 14,450 EUR.

The seasonally adjusted Unemployment Rate in May remained constant at 5%, according to statistics released by Germany’s Federal Labour Office on Tuesday, confirming market expectations.

According to the source, the number of jobless people fell by 4,000 to 2.285 million, contrary to economists’ expectations of a 16,000 drop.

Of more importance was the EU CPI data, also released today. Eurostat preliminary estimates showed that consumer price inflation increased to 8.1% in the 12 months to May, up from 7.4% in April and far ahead of economists’ expectations of 7.7%.

The monthly price increase of 0.8% was also higher than the forecasted 0.6%.

“Another eye-watering inflation statistic for the eurozone in May, at 8.1 percent,” tweeted Angel Talavera, head of European Economics at Oxford Economics.

He cautioned that there was substantial evidence that the current wave’s primary engine, high oil and gas prices, no longer limited inflationary pressure.

This announcement comes just over a week before the European Central Bank meets to announce the end of large-scale asset purchases and reiterate plans to raise interest rates in July for the first time in almost a decade.

President Christine Lagarde of the European Central Bank announced last week that the central bank’s deposit rate would rise in July. A significant increase in Eurozone CPI might support the argument for a hefty interest rate hike.

On the other hand, numerous ECB members have previously discounted a rate rise of 50 basis points, underscoring market participants’ desire for the rate hike to be as gradual as feasible.

The Housing Price Index for March, the Conference Board’s Consumer Confidence statistics, and the Federal Reserve Bank of Dallas’ Texas Manufacturing Survey will all be on the US economic calendar later in the day. In addition, US President Joe Biden and FOMC Chairman Jerome Powell will come together to discuss the economy and rising prices.

German DAX now faces two critical selling zones – the first one at around 14,600 EUR has been tested today, so far unsuccessfully. Another one is in the 14,800 – 15,000 EUR region, where previous highs and lows are converged with the 200-day moving average. If the index jumps above that level, the long-term uptrend could resume.

Alternatively, the support is likely at around 14,280 EUR, and while it trades above it, the short-term outlook seems bullish. 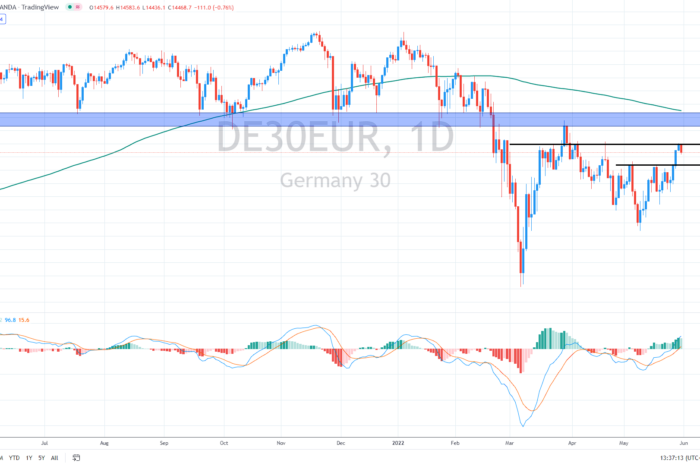