According to information released by the European Commission on Thursday, the Economic Sentiment Indicator (ESI) for the euro fell from 97.3 in August to 93.7 in September. In comparison to the 95 market estimate, this reading was weaker. The ESI for the EU decreased by 3.5 points to 92.6.

At -28.8, a fresh record low, the consumer confidence index for the euro area matched the flash estimate.

Moreover, according to the latest data, Inflation in North Rhine Westphalia, the most populated state in Germany, rose 10.1% year over year in September, marking the largest increase since the early 1950s.

In other news, Pablo Hernandez de Cos, an official at the European Central Bank (ECB), stated on Thursday that he hasn’t yet seen conclusive proof of the de-anchoring of inflation expectations in the eurozone, according to Reuters.

“Quantitative tightening could potentially cause market turmoil in certain market segments, as supply may outgrow demand and liquidity may dry up. This could imperil policy normalization path at a time in which all our efforts should be focused on it,” he added.

Moreover, Olli Rehn, a member of the Governing Council of the European Central Bank (ECB), said on Thursday that the ECB needs major rate rises in the upcoming ECB sessions, according to Reuters. Rehn went on to say that a rate increase of either 75 or 50 basis points would be regarded as substantial.

In addition, ECB President Christine Lagarde predicted that rates will climb over the ensuing sessions when speaking at a US-European GeoEconomics conference. A 75 basis point rate rise at the October meeting was also supported by Peter Kazimir, a member of the ECB’s governing council, and Martins Kazaks, the governor of the Bank of Latvia.

Read more: Do Kwon allegedly tried to run with 3,313 bitcoins

The next intraday target is at yesterday’s lows of 11,870 EUR, and if not held, a further decline to 11,500 EUR could occur quickly. 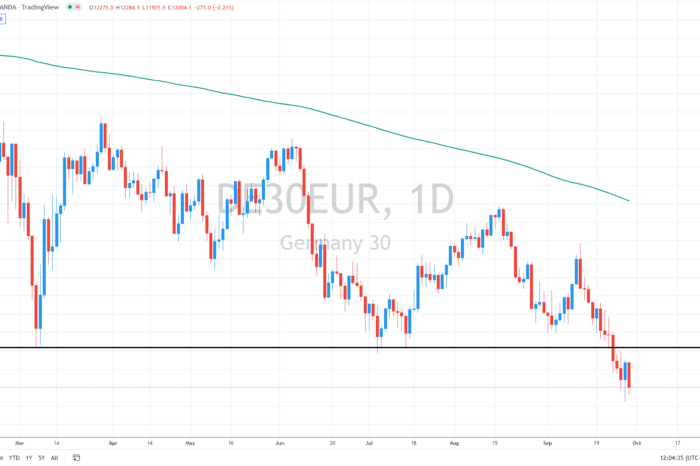