This week, the ECB meeting looms, with some members seeming very hesitant about rapid policy normalization.

The German DAX index moved closer to its vital support line without any significant buying volume, implying another leg lower could occur soon.

The final revision reaffirmed on Wednesday that the Eurozone’s GDP grew by 0.8% quarterly in Q2 as opposed to 0.6% the previous quarter. The reporting period’s figure was expected to be 0.6% by the market.

The bloc’s GDP growth increased by 4.1% on an annualized basis in Q2 compared to the 3.9% estimated in the first estimate and the 3.9% forecasts.

The Q2 employment change for the bloc was 2.7% YoY and 0.4% QoQ. Across the board, the employment figures exceeded forecasts.

Moreover, according to the official figures released on Friday, industrial production in Germany decreased in July, indicating that the manufacturing sector’s rebound is waning.

You may also read: LULU seeks to break bearish trend amid solid fundamentals

In numbers corrected for seasonal and calendar influences, the federal statistics body Destatis said that the industrial production of the Eurozone’s economic powerhouse dropped by 0.3% monthly, compared to a -0.4% projected and 0.8% last.

German industrial production declined by 1.1% on an annualized basis in July compared to a -0.5% decline previously reported.

Meanwhile, Nord Stream 1 is essentially shut down, according to Russian President Vladimir Putin, who also noted that “we can launch Nord Stream 2 gas pipeline if necessary.”

On Thursday, the ECB decides on monetary policy, with a few ECB members on Tuesday seeming very hesitant about rapid policy normalization. While policymaker Yannis Stournaras stated that inflation in the eurozone was near its top, policymaker Martins Kazaks warned that a broad and prolonged recession might limit rate rises.

According to Reuters, 34 out of 67 economists surveyed anticipate the ECB to boost the rate on the primary refinancing operations by 75 basis points to 1.25%, as opposed to 29 analysts who predict a 50-basis-point rise.

The critical support for the DAX index lies at around 12,430 EUR, where the index has stopped three times already. However, the next wave of selling could drag the price below that level, likely triggering massive stop losses, sending the price toward 12,000 EUR quickly.

Alternatively, the index must climb above 13,000 EUR to cancel the immediate selling threat, with the next resistance near 13,130 EUR. 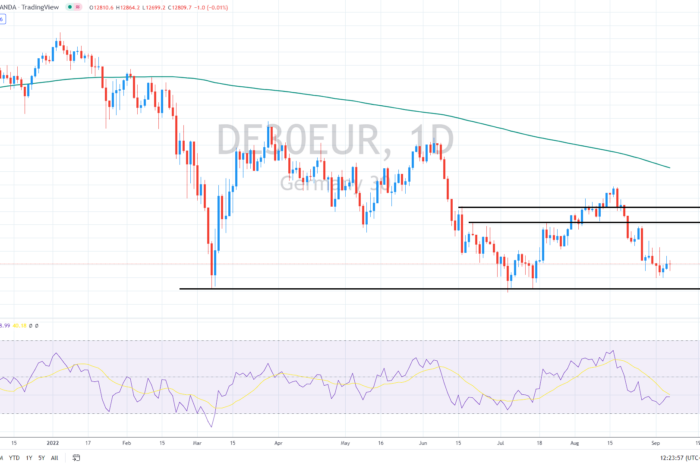