Today, the German DAX index is expected to trade in a narrow range as investors await the Fed meeting later in the session.

The German DAX index rallied 13% in October, erasing most summer losses. However, it stopped near 13,400 EUR, which poses a significant resistance for the index.

According to the most recent figures released by Destatis on Wednesday, Germany’s unemployment rate remained constant at 5.5% in October. The market expected a print of 5.5%.

In contrast to forecasts of 15,000, the Unemployment Change increased by 8,000 during the reporting period, down from 14,000 in August.

Meanwhile, the S&P Global/Final BME’s Manufacturing PMI for Germany for October was revised downward to 45.1 from 45.7 estimates.

In the US, analysts anticipated that this morning’s ADP Employment report would demonstrate a slowdown in job growth in October as a result of the deterioration in this week’s US manufacturing surveys’ employment sub-indices.

However, similar to JOLTS, the ADP statistics demonstrated a rise in the labor market, with 239,000 jobs added in October (compared to 192,000 gained in September) and better than the 185,000 addition forecast.

“This is a really strong number given the maturity of the economic recovery, but the hiring was not broad-based. Goods producers, sensitive to interest rates, are pulling back, and job changers are commanding smaller pay gains. While we’re seeing early signs of Fed-driven demand destruction, it’s affecting only certain sectors of the labor market,” Nela Richardson, Chief Economist, ADP, said after the data.

All eyes are on Fed

Later in the session, the US central bank concludes its two-day monetary policy meeting. It is primarily believed that the Fed’s officials will decide to boost interest rates by 75 basis points, marking the fourth straight hike of this magnitude.

Equity markets have been rising over the past several days due to growing optimism that Fed Chair Jerome Powell will hint at the central bank taking its time with more rate rises during his next news conference.

Volatility is expected to be highly elevated after the announcement, with financial markets likely jumping up and down in the initial reaction.

The significant resistance now stands near 13,415 EUR, and if the DAX index closes above that level, it could be a strong bullish signal, targeting the 200-day moving average at 13,650 EUR. So the outlook could change to bullish in that case. 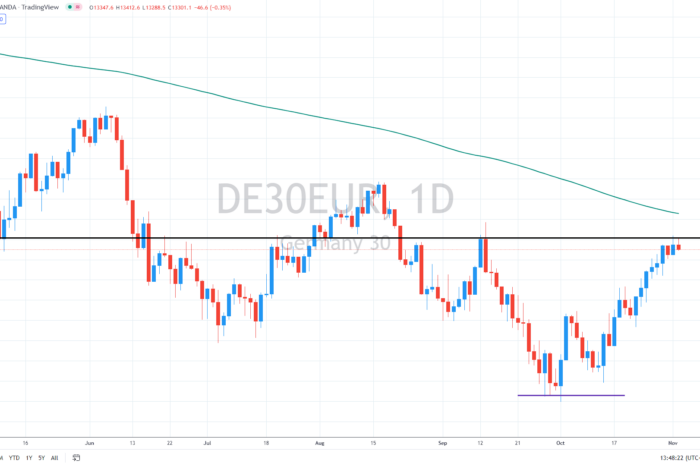