It looks like rate hikes are bullish for stocks nowadays as the ECB's decision sent the German DAX flying.

The German DAX index rose half a percent on Thursday, jumping to six-week highs as the index got supported by today’s ECB decision, which sank the euro below parity against the dollar.

In an effort to lower inflation from a 40-year high, the European Central Bank increased its benchmark interest rates by another 75 basis points, pushing the deposit rate to 1.50%, the highest since 2008. The refinancing rate was also raised by 75bps to 2.00%, all as expected. The central bank also announced that additional rate increases are coming.

The Governing Council, using its meeting-by-meeting methodology, will base the future policy rate path on the changing outlook for inflation and the economy.

“With this third major policy rate increase in a row, the Governing Council has made substantial progress in withdrawing monetary policy accommodation,” the ECB said in a statement detailing its decisions.

The ECB also announced that it would reinvest principal payments from expiring securities at least through the end of 2024.

The bank also announced that it would modify the terms of TLTRO III, an ongoing operation, in order to tighten financial conditions further. The process had made extensive, incredibly inexpensive loans at the height of the epidemic. Since then, changes have rendered it unnecessary and may have increased the pressures that have caused annual inflation in the Eurozone to reach 9.9%.

The inflation rate is still much over the target and will continue to be so for some time. Inflation in the eurozone hit 9.9% in September. Rising energy and food costs, supply constraints, and the rebound in demand following the epidemic have all recently contributed to a widening of pricing pressures and a rise in inflation.

The monetary policy of the Governing Council aims to reduce demand support and protect against the possibility of a prolonged increase in inflation expectations.

You may also read: Mercedes-Benz increased earnings in Q3 by 83%

And as always, to ensure that inflation stabilizes at its objective of 2% over the medium term, the Governing Council is prepared to adapt all of its tools within the scope of its mandate.

It looks like the ongoing bullish trend could push the price toward previous highs near 13,400 EUR. However, if the price does not stop there, the index could jump to the 200-day moving average, currently near 13,700 EUR.

Alternatively, the support should be located in the 13,000 EUR area, followed by the demand zone near 12,600 EUR. 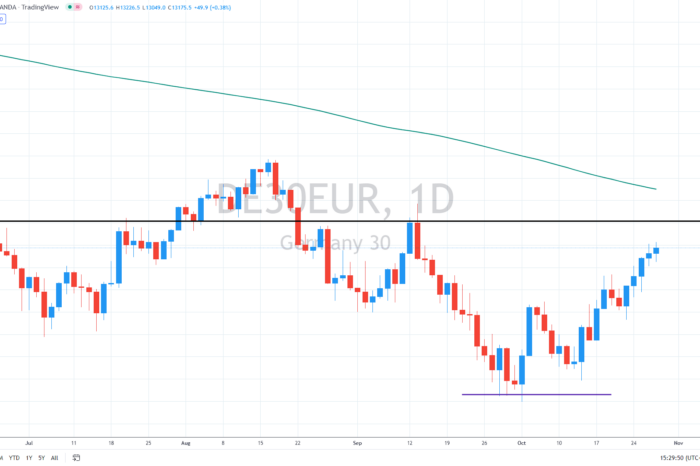