How safe are the fiat currencies in terms of stability?

In the world of cryptocurrencies, we quite often encounter a situation where people try to compare them with the standard national currencies of countries.

In the world of cryptocurrencies, we quite often encounter a situation where people try to compare them with the standard national currencies of countries. It is no wonder, as it is the most common means of exchange, they come into contact during their life. In these debates, one can also read that fiat currencies are better and more secure as they are managed and controlled by the states. This argument is fascinating, especially since this is probably their most significant disadvantage. However, it often hides behind “harmless” inflation and does not get used to it until the bigger crisis. Therefore, we will look at a very current topic and historical moments that have literally shown fiat currencies naked and opened many people’s eyes.

During the First World War, Germany (we will not delve into the historical names of this state) decided to leave the gold standard, which served as a cover for the national currency. They wanted to obtain liquidity to finance the war industry, and they planned to cover these fictitious funds through post-war reparations. The exchange rate of the Reichsmark against the dollar fell almost immediately from 4.2 to 7.9, and it was just a taste of what awaited the German economy.

The plans to win the First World War did not come out according to Germany’s ideas, and the victorious states, on the contrary, applied war reparations against them. Of course, they could not afford to repay these debts, and, in addition, they continued to print huge amounts of new money to sustain the domestic economy. All this without any underlying assets that would cover this process. In 1919, the exchange rate reached the level of 48 marks per dollar, and the situation continued to escalate. At the end of 1922, Germany found itself in a situation where its national currency was virtually completely lost in value, and the exchange rate against the dollar was 7,400. To give you a better picture, the price of one bread in Berlin year-on-year (1922-1923) rose from 160 marks to an incredible 22 billion marks! Yes, one loaf of bread! You could buy a dollar at that time for about 4 trillion (that’s 12 zeros after four) marks.

Let’s move to Hungary. What is their experience with the stability of the national currency?

After the First World War, the Austro-Hungarian Empire fell apart. Among the new states that emerged from this was also Hungary, which has had governance problems since its origin. As in Germany, they decided to solve financial problems through headless money printing. The national currency exchange rate against the dollar at the level of 5 kronen (past Hungarian currency) before the war became a thing of the past, and in 1924 you needed 70,000 kronen to buy $ 1. This even forced the country to change the (name) of the currency to pengo, with 1 pengo equaling 12,500 kronen.

The situation worsened after the Second World War, in which Hungary was one of the main battlegrounds, and the war almost completely destroyed the industry there. The government has once again stimulated the economy by printing new money. Of course, everything got out of hand to such an extent that the goods, which cost less than 400 pengos in 1945, were sold for one septillion pengo (one and 42 zeros) in 1946. Due to hyperinflation, the economy got into a situation where prices rose by 150,000% a day. It was no longer even important for the government to collect taxes because the funds they collected the next day had virtually no value. After several more currency exchanges to make it work, they finally got to today’s forint. It was issued at an exchange rate of 400 quadrillions (24 zeros) pengo.

Another county, same … – Yugoslavia and Zimbabwe

Again, these were countries that had been destabilized by long-standing geopolitical conflicts. Yugoslavia made history with the second-longest period of hyperinflation (22 months), and the dinar came from a 15 to 1370 exchange rate in a few years. Inflation peaked at 313 million % in 1994.Interestingly, the level of 50% is already considered hyperinflation. The currency officially collapsed on January 6, 1994.

We can undoubtedly consider Zimbabwe as the state that has experienced one of the most brutal hyperinflations in the last 20 years. Their economy has been in deep trouble for years due to hyperinflation in 2007. In its final stages, the government had to stop using the currency at all, and you could only buy goods/services in foreign currencies.

Did it all happen too long ago or too far? Wait for it

Among the countries that have gone through a similar experience as above, we could include Venezuela, Chile, Peru, Argentina and Angola. In all of them, of course, the consequences of the loss of fiat money were borne by the most ordinary working people, who were, in fact, the only ones to create real values. However, they were subsequently forced to exchange for equivalent (salary), which proper functioning was their government officials’ job. And here we come to the main problem.

Fiat currencies depend on the administration and decisions of concrete people with their own interests. However, they often fall far from the interests of the population. If it seems to you that nothing like this is possible in our latitudes, and at present, then you are probably wrong. Yes, we do not live here under the rule of dictators who can do whatever they want, but the printing of uncovered money is taking place constantly and in huge volumes. The maturity of Western economies and cooperation between countries guarantee that we can split potential problems geographically and over time. Still, in principle, we can only be one wrong decision away from hyperinflation.

Currently, this threat is further underlined by the current situation on the European continent, where Russia, as an aggressor, has unleashed an open military conflict in Ukraine. A month ago, one could have imagined that there would be a war that would drive millions of refugees out of the country? Who could have imagined that Russia would close the stock market, raise interest rates to 20% and ban the export of cash over $ 10,000? Who expected to be threatened with a cut-off from the supply of strategic raw materials from Russia, which could cause the collapse of all the affected economies? 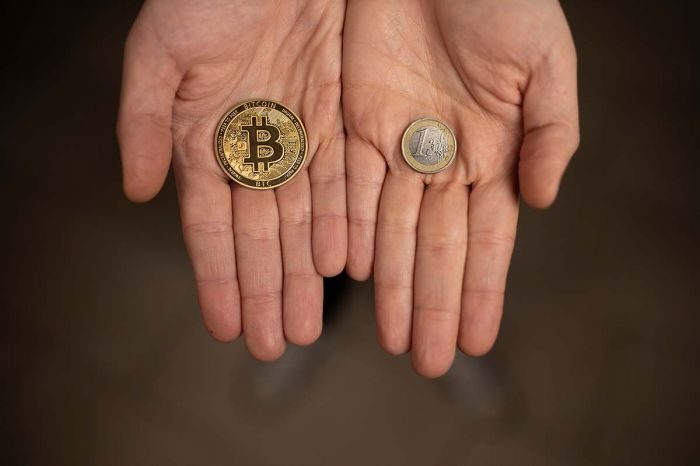 Caucasian hands shows one bitcoin coin and one Euro

That is why fans of cryptocurrencies do not rely on fiat currencies, the stability of which depends on the decisions of politicians. Cryptocurrencies are, of course, volatile as they are still a relatively young and small market. But all we have to rely on is pure math, and it always works the same way. It doesn’t care who you are, where you are from, or how much money you have. This is the real strength and one of the main advantages of cryptocurrencies.