Oil seems massively overbought and poised for a correction if the situation in Iran and Ukraine improves.

The WTI benchmark traded lower on Wednesday, trying to consolidate after a barrage of bearish news for the commodity.

Oil dipped yesterday, falling below the critical 90 USD threshold as representatives from the US and Iran and the other nations involved in the negotiations to revive the nuclear deal are returning to Vienna.

Shortly after, the US State Department said a deal is “in sight” but also warned time is running out on the talks.

At the same time, Iranian Foreign Ministry spokesman Saeed Khatibzadeh said progress depends on whether or not the US is willing to lift the necessary sanctions.

With that in mind, the US restored sanction waivers on Iran’s nuclear program, which the Trump administration previously restricted. Iranian Foreign Minister Hossein Amirabdollahian said the move was “good, but not enough.”

Should Iran’s new supply hit the markets, it could be negative news for the oil price. At least from the short-term perspective.

Additionally, it looks there has been some de-escalation in the Russia-Ukraine situation as Zelensky talked down Biden’s hawkishness and Macron’s meeting with Putin.

“Ukraine is the big one, with the possibility of easing tensions after the Macron talks,” Michael Poulsen, Senior Oil Risk Manager at Global Risk Management, said.

Moreover, Carsten Fritsch, a commodity analyst at Commerzbank, echoed this view, saying, “the reason for the current price weakness is the prospect of a return of Iranian oil exports.”

Oil stocks on the decline

Later today, the EIA crude oil stockpiles report is due, measuring the change in the number of barrels in crude oil stock and its derivates, released by the Energy Information Administration. Volatility in oil is usually elevated after these weekly reports.

The long-term uptrend in oil remains bullish as long as the black gold trades above its previous highs of 85 USD. Therefore, dips to this zone are expected to be bought.

However, several time frames seem overbought as oil has rallied 40% in two months without any meaningful correction. Thus, this could be a good opportunity for many investors to take some profits and lower the price.

The MACD indicator is also ready to send a bearish signal from a massively elevated zone. The last time it sent such a signal was in November, dragging the price lower from 85 USD to 65 USD.

Alternatively, the resistance is near 90.00 USD, followed by the current cycle highs at 92.50 USD. 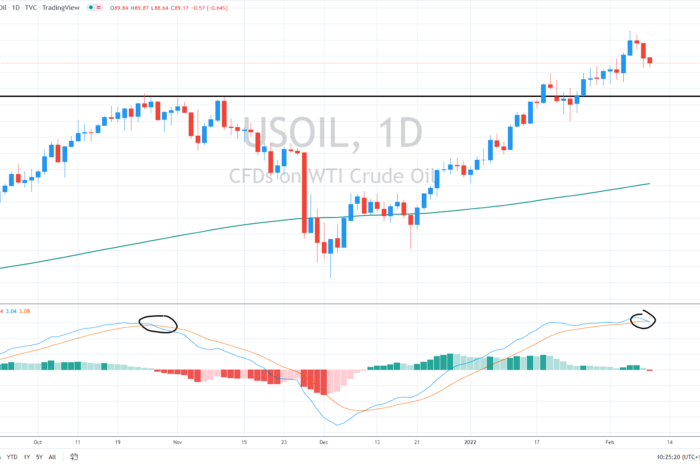