According to Chinese customs data, May gasoline exports fell by 45.5%. This is a year-on-year drop of almost 93%.

While last year in May China exported 1.55 million tonnes of gasoline, in May this year it was only 840,000 tonnes. We saw an even bigger drop in diesel, with only 120,000 tonnes exported, compared to 1.68 million tonnes in the same period last year.

It is fair to say that in today’s geopolitical and economic situation around the world, year-on-year comparisons are not telling. But we can see also big jumps when we compare it with April this year, when China exported 980,000 tonnes of petrol and 530,000 tonnes of diesel.

The problems have come along with restrictions on movement and industry as part of the fight against the covid pandemic. These restrictions have depressed local fuel consumption, which only started to return to normal in May. 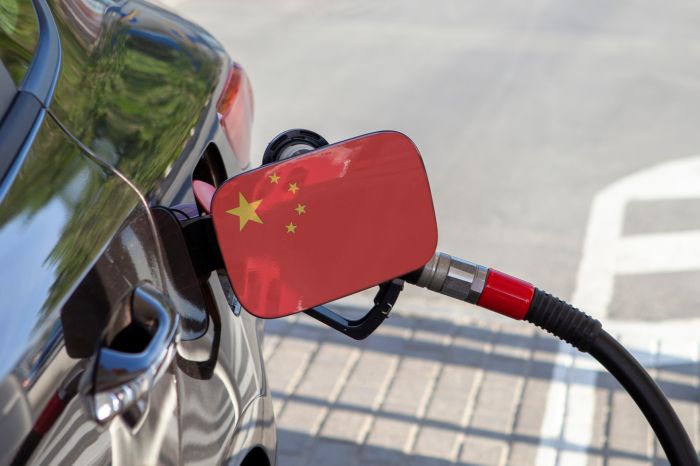 Flag of China on the car’s fuel tank filler flap

What about other countries?

China has been reducing its exports of petroleum products from the country despite strong demand in neighboring countries. According to traders and distributors of diesel and petrol, suppliers mainly from the Middle East are concentrating on supplying Europe, which until now has depended mainly on Russian oil, which it now wants to wean itself off.

Countries in Southeast Asia and Oceania are thus trying to source the missing commodities mainly from South Korea.

Total refined fuel exports last month were almost 40% lower than a year ago at 3.27 million tonnes, the second-lowest monthly volume since July 2020.

Export quotas were cut to curb excessive domestic refinery production at a time of reduced domestic demand. Now, however, the country is seeing ever-increasing inventories, so it has issued permits for June to release an extra batch of commodities. A Singapore trader said.

“Beijing’s quota allocation aims to offset domestic inventory pressure instead of comforting the regional market, while the increase in China’s actual oil product outflow may more or less be like a drop in the bucket.”

Even including the extra quota, the total allocation for fuel exports in 2022 to date is 17.5 million tonnes, still down nearly 41% from last year.