Bitcoin dropped below June support of $17,600 after Binance bought major crypto exchange FTX in the midst of rivalry.

Alameda Research showed possible liquidity problems, which prompted CZ, the CEO of Binance, to sell their stake in FTX worth a couple of hundred million dollars. This caused a massive selloff on FTX (FTT token) and the whole crypto market.

This event sent Bitcoin to a new low of $17,000, a little below its June support of $17,600. While many panic, given the current situation, some indicators point to the fact that the bottom may be near.

Bitcoin is trading well below its all-time high (ATH) level from 2018 of $20,000. The dispute between Binance and FTX caused crypto markets to dive and wipe out $200 billion in valuations in just two days. The current triangle formation suggests Bitcoin could go even lower to approximately $14,000.

Related article: LBRY plunges after losing to SEC – is Ripple next?

Previously, two divergences stopped Bitcoin from dropping more, while a third divergence is in the making. When Bitcoin creates a new low and divergence is created, it could be the local bottom from which Bitcoin could go up again, back above $20,000. 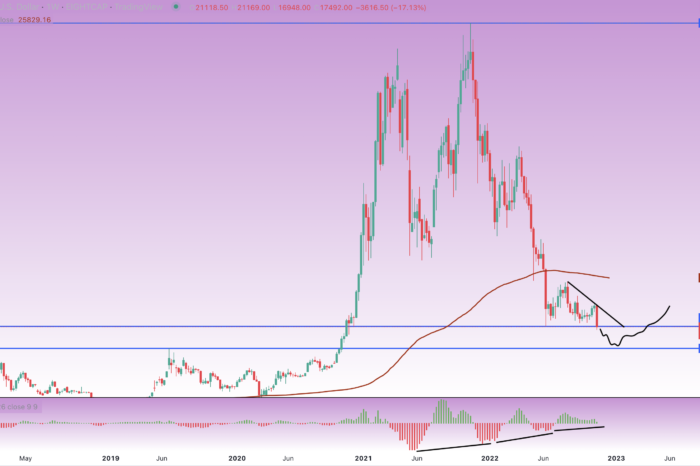 The selling pressure on the support is enormous and it will likely not hold. However, that doesn’t mean it’s the end of crypto. Bitcoin, along with the whole crypto market, is currently significantly oversold, which could bring a relief rally soon. But before it happens, Bitcoin may still fall to approximately $14,000 before taking off. 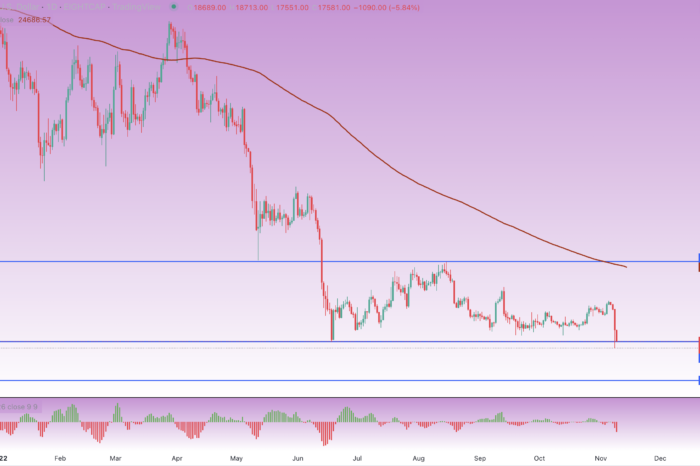 Bitcoin is down by 75% from its ATH, and it could be down by 80% if it falls to the mentioned support. This is historically the best time to buy Bitcoin. It also dropped by about 80% in 2018 and 2014. However, it’s not all just about percentages. The time length of the bear market is also important, as shown in the tweet from Bitcoin Archive.

Are we there yet? #Bitcoin pic.twitter.com/pfXQN7apJr

The previous bear market lasted about a year, while the current one also lasts approximately one year. Bitcoin could still continue to fall, but it clearly indicates that the bottom may be near. The Fed also plans on slowing down rate hikes, which could help risk-on assets like Bitcoin get a relief.

This is a historical moment for Bitcoin, as it is one of the toughest and longest market declines. Almost $1 trillion of Bitcoin’s market cap evaporated in one year, taking the whole crypto market down with it. Before trying to time a market bottom, investors should consider dollar-cost averaging (DCA) to avoid heavy losses.