This article discusses the Australian dollar's decline after encouraging US economic statistics demonstrating that the labor market is still solid.

The AUD/USD reverses course from weekly highs recorded on Wednesday, when the Australian dollar reached a high of 0.6530. However, the Federal Reserve will continue to tighten monetary conditions after encouraging US economic statistics demonstrating that the labor market is still solid. As a result, the AUD/USD is declining.

According to the weekly statistics released by the US Department of Labor (DOL) on Thursday, there were 193,000 new applications for unemployment benefits in the week ending September 24. This print exceeded the 215,000 market forecast and followed the previous week’s corrected 209,000 (from 213,000) print.

The 4-week moving average was 207,000, down 8,750 from the corrected average from the prior week, and the advance seasonally adjusted insured unemployment rate was 1%, according to further information in the report.

Shortly after the data, James Bullard, president of the St. Louis Federal Reserve Bank, said on Thursday that the previous week’s data on weekly jobless claims was a “super low number.”

“The labor market is very tight no matter how you cut it.,” Bullard added. “I have a hard time seeing the unemployment rate going up that much with so many job openings.”

In addition, according to Reuters, Bullard also stated on Thursday that the Federal Reserve needs to hike rates very quickly to reach a level that is at least minimally acceptable to combat inflation.

“Fed always watches global market developments but is focused on US market and fundamentals. We are determined to get to the right level of the policy rate. Other central banks will have to react to Fed’s intentions.” Bullard added.

Prior to the Reserve Bank of Australia (RBA) monetary policy meeting next week, Australia announced inflation for August during the Asian session, which figures have revealed decreased somewhat due to declining gasoline costs. Compared to July’s 7% increase, Australia’s CPI increased by 6.8% YoY.

Furthermore, Chinese PMIs for September are due, expected to decline slightly.

Housing Credit and Private Sector Credit figures will be available on the Australian economic calendar on Friday. In addition, the Core PCE Price Index, the Fed’s preferred inflation indicator, the Chicago PMI index, and the University of Michigan Consumer Sentiment will all be released on the US front.

There seems to be a nice triangle pattern in the 30-min chart, with a possible upward breakout. However, the resistance is near 0.65. In that case, we could see a rally toward 0.6530 quickly.

You can also read: Stanley Druckenmiller disappointed by Fed and favors crypto 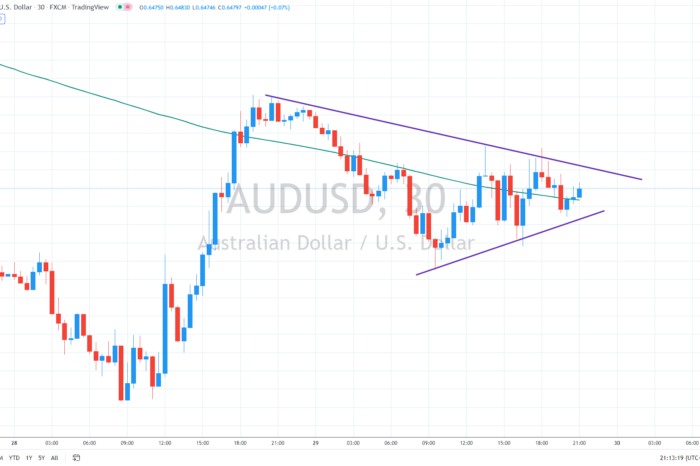