The Australian dollar has been supported today by the Reserve Bank of Australia's minutes from its May monetary policy meeting, which indicated that a more significant interest rate rise in June is still feasible.

The Australian dollar surged 1% Tuesday, rising above the critical short-term resistance in the 0.70 area and trading at 0.7040 ahead of the US session.

Australia’s central bank indicated that a more significant interest rate rise in June is still feasible given the upside risks to inflation. It’s worth noting that Australia’s first-quarter inflation rate was the highest in over 20 years.

You may also read: Gold is in decline for the month

It was agreed that hiking the cash rate by 15 basis points was not preferable, given the policy’s stimulative nature and the likelihood of subsequent rate hikes.

The established norm of adjusting the cash rate in increments of at least 25 basis points would be broken by a 15 basis point rise. Although global factors contributed to the increase in inflation, members highlighted that strong domestic demand and capacity limitations also had a role.

Given the upside risks to inflation and meager interest rates, a 40 basis point rise might be justified. However, according to the members, the favored choice was 25 basis points.

On the other hand, China’s economy slowed abruptly in April, with statistics released on Monday showing that the country’s industrial output and retail sales plummeted at the sharpest rate in more than two years, falling short of expectations.

US data and Powell in focus

Later today, retail sales data will be on the economic agenda throughout the US session. Market participants expect a month-over-month gain, likely boosting the USD today. In addition, figures on industrial production and capacity utilization are included on the agenda.

Last but not least, Federal Reserve Chair Jerome Powell will speak about inflation at the Future of Everything Festival in New York, hosted by the Wall Street Journal.

The immediate outlook seems optimistic as long as the AUD/USD pair trades above 0.70. The MACD indicator is about to send a bullish signal after a long time, also supporting the bullish case.

The next target for this relief rally could be at 0.7160. If the pair jumps above it, the medium-term outlook could change to bullish, possibly extending toward the 200-day average at 0.7270 (the green line). 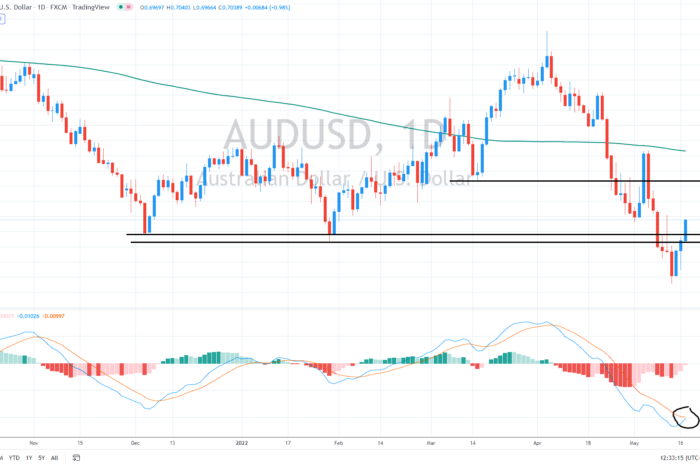