The Australian dollar traded half a percent lower during the EU Session on Tuesday, ignoring the recent risk-on appetite as traders focused on the recent RBA meeting, bringing some disappointment.

The bank had previously raised rates four times in a row by half a percentage point before making the surprise rate hike decision today.

The most recent Reuters poll indicated that the median expectation was for rates to rise by 50 bps next quarter before peaking at 3.35%.

According to Governor Lowe, the size and timing of future rate rises will be determined by the data and outlook for inflation and the labor market.

Moreover, it is crucial that the stability of the medium-term inflation expectations be maintained. The Board anticipates more increases in interest rates in the near future.

“Given the tight labor market and the upstream price pressures, the board will continue to pay close attention to both the evolution of labor costs and the price-setting behavior of firms in the period ahead,” he added

The Australian dollar saw some selling pressure, however, the movement was very mild. The RBA has also shown that it is willing to tighten monetary policy much more. This indicates that the cycle of rate hikes has not yet appeared to have ended.

“With a view to today’s RBA decision, AUD is likely to struggle to make ground against USD again though, in particular, while the US central bank sticks to its hawkish rhetoric. As a result, we currently see little upside scope in AUD.” analysts at Commerzbank expect the pair to struggle to gain some ground.

The US economic calendar will include August Factory Orders and JOLTS Job Openings later in the day. The Cleveland Fed and New York Fed presidents are expected to give speeches during American trade hours.

It looks like a nice triangle pattern is forming in the two-hour chart, with the resistance (already tested today) near 0.6530/50. If the Aussie decisively jumps above that level, we might see another leg higher, targeting the 0.67 zone.

Alternatively, if bears regain control, a decline toward the short-term uptrend line near 0.6420 could happen, with the main support located at the current cycle lows near 0.6360. 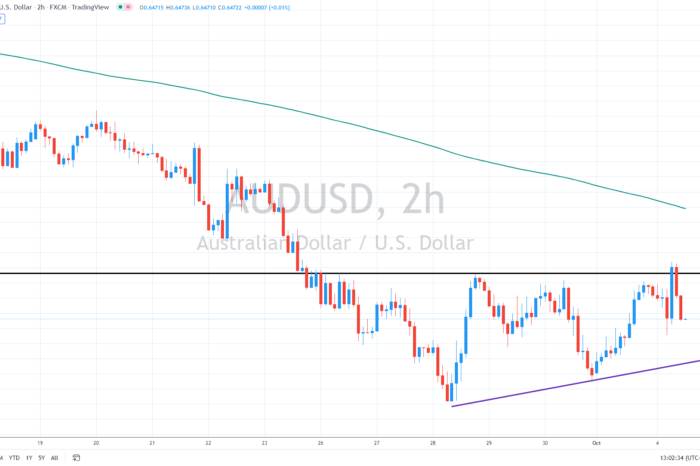