AUD/USD jumps amid Aussie data and broad US dollar weakness

The AUD traded half a percent higher during the Frankfurt session on Wednesday, boosted by the recent Australian data and the ongoing USD weakness.

The Australian dollar, also known as the Aussie, traded half a percent higher during the Frankfurt session on Wednesday, boosted by the recent Australian data and the ongoing US dollar weakness.

Australian data surprised to the upside

The Australian Bureau of Statistics has released Consumer Price Index (CPI) (Nov) data that was higher than expected. The Australian economy’s price index came in at 7.4%, above both the previous announcement of 6.9% and the consensus estimate of 7.3%. In addition, monthly retail sales for November increased to 1.4% instead of the expected 0.6%.

The Reserve Bank of Australia (RBA) will be forced to keep raising interest rates in order to contain skyrocketing inflation as a result of domestic retail demand and stronger-than-anticipated inflation. The RBA’s Official Cash Rate (OCR) is 3.10% at the moment.

In other news, Global Times reported on Tuesday that China’s steel industries had resumed importing coal from Australia as part of attempts to broaden supply sources and maintain import costs, according to an industry insider.

You may also like: TOP 5 ways you can spend your Bitcoin

Furthermore, the Australian Dollar has strengthened as a result of China reopening following a protracted shutdown caused by the Covid-19 pandemic. According to JP Morgan economists, Australia’s economic growth would likely increase by about 1.0% as soon as China is freed from the Covid limitations.

Focus on the US dollar and US inflation

Elsewhere, the Fed’s tightening cycle is expected to come to an end this quarter, and the market is increasingly optimistic that the Fed will start an easing cycle in the third quarter, weakening the US dollar in recent weeks.

“The market does not buy into the Fed’s narrative of the funds’ rate being taken to 5.00% and being kept there for a long time.” analysts at ING said in a note.

The attention is now completely on Thursday’s US CPI announcement after Fed Chair Jerome Powell refrained from offering any policy hints during a panel discussion in Sweden on Tuesday. There are no major economic releases on schedule for Wednesday.

With the headline annual rate predicted at 6.5% in December, a decrease from 7.1%, this is anticipated to imply that inflation dropped further from the previous month. The annual growth rate for the core CPI, which excludes volatile energy and food prices, is projected to be 5.7%, down from 6.0% in November.

Another interesting topic: Focus on central banks: BoJ with major change in 2023

Alternatively, a decline below the 200-day moving average could trigger stop losses, possibly sending the Aussie toward 0.67. 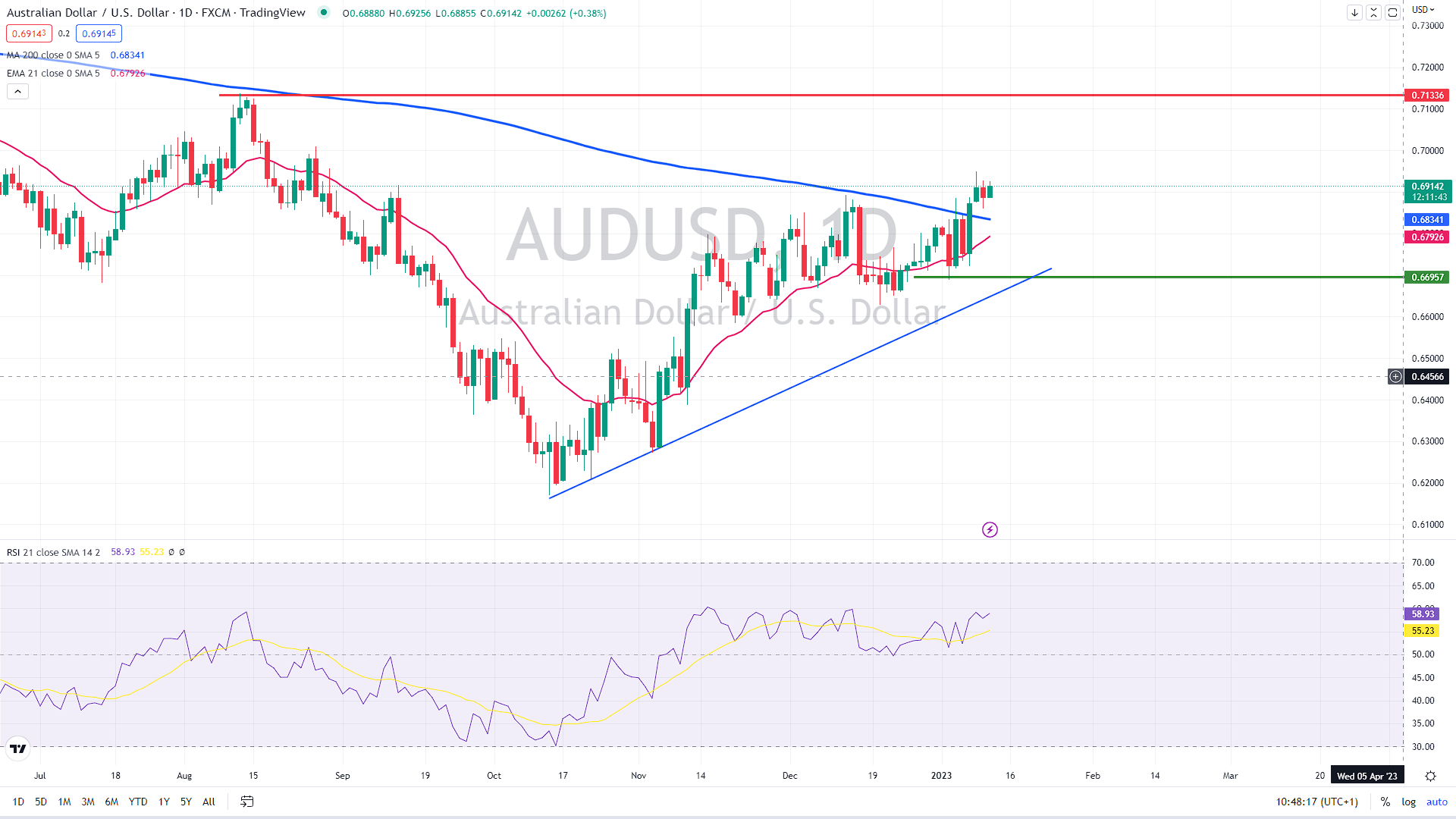