Sentiment has been positive today, bolstering demand for risky assets such as stocks, or the Australian dollar.

The Australian dollar traded nearly 1% higher on Tuesday, influenced by today’s RBA meeting and broader weakness in the USD ahead of this week’s Fed decision.

RBA increases rates again, but the pace of hiking slows

As largely anticipated, the Reserve Bank of Australia (RBA) lifted its official cash rate (OCR) by another 25 basis points (bps) to 2.85% at its monetary policy meeting on November 1.

In the most recent Reuters poll, over 90% of participants predicted that the RBA would increase its benchmark cash rate by 25 basis points to 2.85%.

At the following press conference, Governor Phillip Lowe said that the Board is steadfast in bringing inflation back to goal as the central bank anticipates more increases in interest rates in the future.

Furthermore, increasing interest rates and higher inflation are straining many people’s finances. Inflation is now predicted to peak at roughly 8% later this year.

The forecast for GDP growth has been somewhat reduced downward; about 3% is anticipated this year, and expansion of 1.5% for 2023 and 2024.

Earlier in the day, the Australian dollar climbed along with Chinese stock markets and took advantage of the positive Caixin Manufacturing PMI, which came in at 49.2 in October as opposed to the anticipated 49.0.

Focus on the Fed, again

Meanwhile, markets are repositioning their long positions in the US dollar ahead of the crucial Fed rate rise decision scheduled for Wednesday. Therefore, the AUD/USD pair can easily trade over 0.6400 thanks to the resulting dollar depreciation.

In light of growing optimism that the Fed will begin to slow the pace of rate rises as it observes indications that specific market segments are cooling off, attention will likely be focused more on what Chair Jerome Powell says and signals during his press conference on Wednesday afternoon.

The ISM Manufacturing PMI survey for October and the JOLTS Job Openings data for September will be included in the US economic calendar later today.

AUD/USD seems stuck in a narrow range between 0.6540 and 0.6350, and the price must break from this consolidation phase before starting a meaningful momentum to either side. 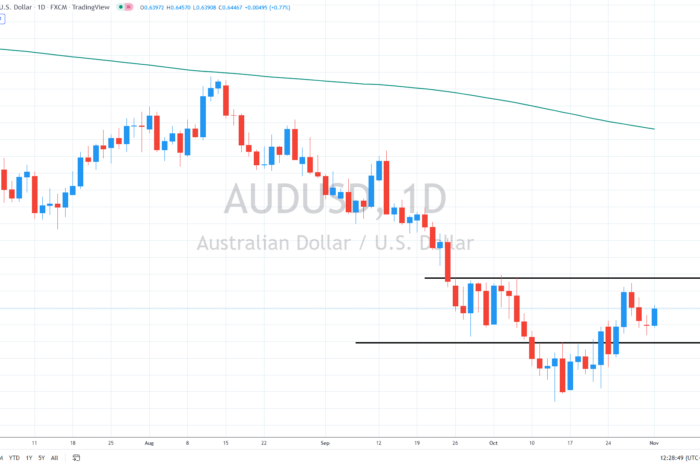