Today's huge reversal marks another sign that the bearish trend in risk assets could be over for now.

The Australian dollar traded flat during the EU session, ignoring some negative news from China as investors decided to ignore the recent macroeconomic events.

Chinese health authorities announced over the weekend that the nation would continue its rigorous COVID-19 policy, silencing last week’s rumors that China will abandon the approach, which has slowed the second-largest economy in the world’s growth.

Nevertheless, the initial risk-averse mood quickly improved during the EU session today as traders bought the dip in risk assets, pushing the AUD/USD pair back to positive territory and erasing today’s 1% decline.

You may also read: Weekly macro report – Fed is certain about one thing

Gains are still modest as traders cautiously await the publication of crucial US inflation data on Thursday, which may offer additional hints as to the Federal Reserve’s intention to raise interest rates in December, as well as the political fallout from the midterm elections on Tuesday, where the outcome could have a significant impact on Congress’ control and President Joe Biden’s agenda for the next two years.

Me trying to avoid a losing trade 🤣 #memes #trading pic.twitter.com/uN3sDgocVa

Today’s disappointing Chinese trade statistics were rather overlooked by market players. Data demonstrated that, in October, exports performed worse than anticipated due to a decline in shipments to the EU and weakening worldwide demand.

In contrast to consensus projections of $96 billion, the trade balance increased to $85.2 billion from $84.7 billion in September.

In October, exports increased 0.3% year over year, down from 5.7% growth the previous month and far less than the average estimate of 4.5% growth. In the meanwhile, imports increased 0.7% after increasing 0.3% in September. Economic experts had predicted little growth.

The scope of economic activity has been reduced by limitations on the movement of people, resources, and machinery to control the pandemic mess. Notably, Australia is China’s top trading partner, and Chinese trade operations have a substantial influence on the Australian dollar.

Aussie stuck in a narrow range

Still, the major resistance remains near 0.6540, and if the Aussie manages to close above it, the medium-term outlook could change to bullish, targeting the 0.67 level in the initial reaction.

Read more: The threats of CBDCs – why we should not take it lightly

On the downside, the major support seems to be in the vicinity of the previous lows – 0,63/6340, As long as the pair trades above that level, the short-term outlook seems bullish. 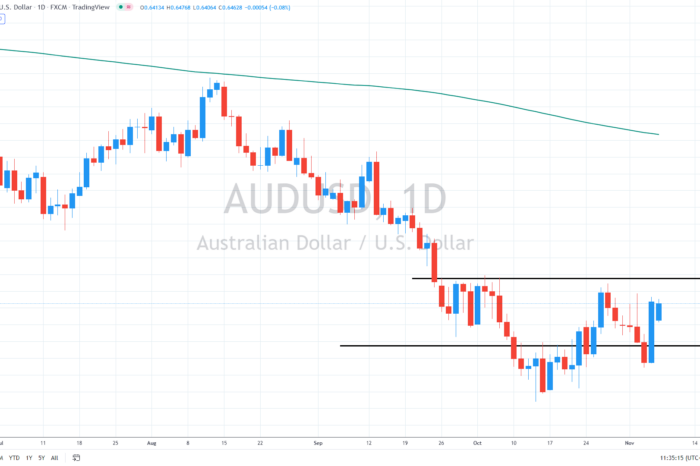