The reason is the risk of further measures against the Covid pandemic, but also a possible problem between China and the US.

China is becoming a potential risk for many US companies. First, there is the ever-present threat of a political problem arising between China and the US. And then, companies have now seen the direction China can take when problems like the covid pandemic arise.

Potential alternative countries are not that far away

Apple already has a small part of its production in India and Vietnam. So in these countries, Apple could expand its production and diversify its plants a bit more so that a potential production failure in one country would not cause a major problem for the company.

Now, according to analysts, more than 90% of Apple’s products are made in China. Such heavy dependence on a given country makes Apple’s supply chain very vulnerable. For example, just over 3% of the world’s iPhones were made in India last year, and almost all the rest were in China.

Apple sought to diversify its operations outside of China before Covid-19 expanded globally in the early 2020s. So now the Californian company is renewing that effort and will be looking for other manufacturing options along with its suppliers. 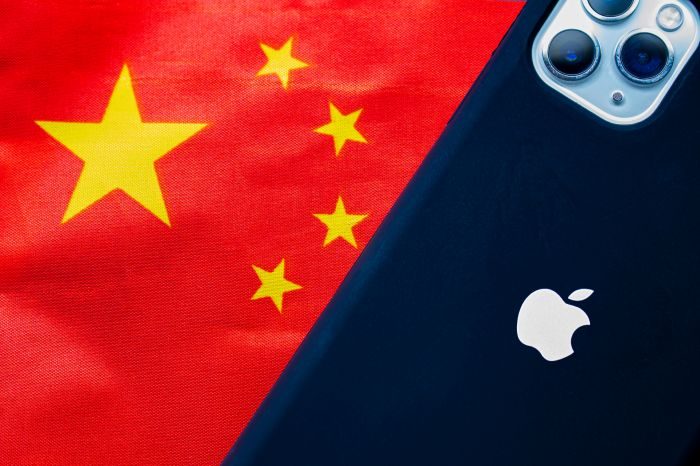 A China flag with an Apple iPhone

Read also: The US economy may grow more than China’s this year

The other country mentioned, Vietnam already hosts the manufacturing facilities of another tech giant, Samsung. This company has previously limited its manufacturing involvement in China. On the other hand, it has long been manufacturing its electronics at home in South Korea, but also in Brazil and Indonesia.

Of course, relocating part of its production may create the problem of an insufficiently skilled manufacturing workforce. After all, this move will create a lot of new jobs. Perhaps that is why Apple recently launched a new Supplier Employee Development Fund.

The new started has started on a negative note as investors exited their long positions in risky assets.
3 min

Chevron has been given permission to resume oil production in Venezuela. All exports are expected to go back to the US.
3 min

Volatility could be lower today, but it looks like the rally in DAX has run out of steam.
See more

The Reserve Bank of India will start testing its central bank digital currency (CBDC) on December 1st. The testing will run in Mumbai, New Delhi, Bengaluru and Bhubaneswar. Some of the major banks, such as the State Bank of India, ICICI Bank, Yes Bank, and IDFC First Bank, will participate.

The Canadian dollar weakened above $1.35—a level not seen since early November after the GDP results. The Canadian economy increased by 2.9% annually in Q3 of 2022, beating expectations for a modest 1.5% growth.

Spain’s annual inflation fell to 6.8% in November 2022, moving further away from July’s 38-year high of 10.8%. Inflation remained below market expectations at 7.4%. The slowdown in the inflation rate was mainly led by declines in the cost of fuel and electricity.